Echinolittorina nielseni: A new species of Periwinkle from the Pleistocene-Holocene of northern Chile.

Periwinkles, Littorinidae, are abundant shallow marine Gastropods, the shells of which are familiar from neaches around the world. However, while they have a fossil record dating back to at least the Eocene, fossil Periwinkles are rather rare, as they live high on the shore in rocky environments, a very bad environment for fossil preservation. To make matters worse, Periwinkle species are very hard to tell apart, as they tend to be similar and their growth is heavily influenced by their environment, so that members of different species growing in similar environments will often resemble one-another more closely than members of the same species growing in different environments.

In a paper published in the journal Palaeontologica Electronica in February 2016, Juan Francisco Araya of the Departamento de Geología at the Universidad de Atacama and the Programa de Doctorado en Sistemática y Biodiversidad at the Universidad de Concepción , and David Reid of the Mollusca Research Group at the Natural History Museum describe a new species of Periwinkle from the upperficial deposits on the coast of Región de Atacama in northern Chile, thought to be no more than Pleistocene in age.

The new species is named Echinolittorina nielseni, in honour of Sven Nielsen of the Universidad Austral de Chile, for his work on Chilean fossil Molluscs. The species is described from a series of 23 specimens. These are large bodies Periwinkles (15.7–22.2 mm in height) with rounded whorls, a concave spire profile and 7-9 strong spiral ribs. 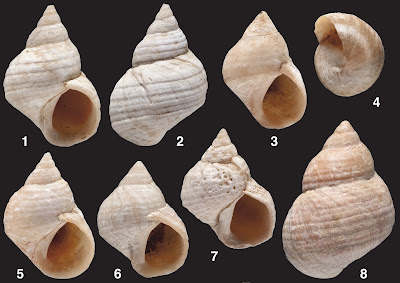 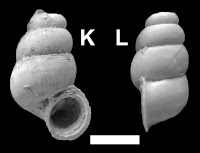 Gastropod predation on Barnacles in the Late Pleistocene of southern South America. Muricid Gastropods (Murexes) are carnivorous Snails which are...

Three new species of Vetigastropod Snails from the Plio-Pliestocene of The Philippines. Vetigastropods are considered to be the most ancient, and primative, group of Snails. They are exclusively marine, but found in almost all marine environments, from the intertidal zones to the deepest abysal...
Follow Sciency Thoughts on Facebook.
Posted by Joe Bauwens at 09:00