What Jurassic Katydids did.

Reconstructing the sounds made by ancient organisms is not something that palaeontologists can normally attempt. There are some fairly well published studies on Hadrosaurs, which suggest that if they had chosen to blow air through their head structures then they would have made a haunting, plaintive, tooting noise, but we have no real way to tell if they actually did this. Other than that we have very little idea what the Mesozoic sounded like. Model dinosaurs in museums often produce roaring noises, but there is no evidence to support this (to the general annoyance of palaeontologists).
On 6 February 2012 a paper appeared in the Proceedings of the National Academy of Sciences by a team lead by Jun-Jie Gu of the College of Life Sciences at Capital Normal University in Beijing and Fernando Montealegre-Zapata of the School of Biological Sciences at the University of Bristol in which they describe for the first time a species of Katydid insect from the Middle Jurassic of Inner Mongolia, and are able to make deductions about the noises it would have made.
Katydids, or Bush Crickets, are largish, nocturnal, insects related to crickets and grasshoppers. Modern Katydids are found throughout the tropics, and temperate North America. They have a varied range of diets, with herbiverous, detrivorous, omnivorous and carnivorous members of the group, and pursue a similarly wide range of lifestyles. The males attract mates from ground-based perches, using species-specific calls, made by rubbing the edges of their wings together; the left wing has a 'file' structure,which is rubbed over sounding cells on the right wing. A fossil species from the Lower Tertiary of Denmark, Pseudotettigonia amoena appears to have used its wings to produce sound in the same way as modern Katydids.
The newly described species, named as Archaboilus musicus, comes from the Middle Jurassic Jiulongshan Formation of Inner Mongolia, making it roughly 165 million years old. It is not the first species of Archaboilus to have been described, but is apparently the first species for which a reconstruction of the possible musical ability has been possible; the name musicus means musical. Unlike modern Katydids it seems to have had both files and sounding cells on each wing (this is seen in the related Hump-winged grigs of North America). 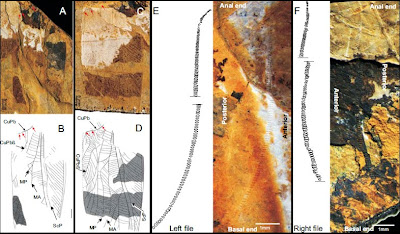 The wings of Archaboilus musicus, (A-D) photographs and line drawings of the left and right wings, showing wing venation. Red arrows show the locations of the files. (E) Detail of left File. (F) Detail of right file. From Gu et al. (2012).
From the anatomy of the preserved wings Gu et al. have been able to reconstruct the song of Archaboilus musicus. They interpret this as being a mono-tone chirp, deeper than the chirp of modern Katydids, but well suited to the open coniferous woodland in which A. musicus lived; in such an environment the call would have carried a long way.
Posted by Joe Bauwens at 21:18