Greenpeace activists occupy the offices of Cairn Energy in protest at Greenland drilling.

On Monday 18 July 2011, at about 8.15 British Summer Time, 50 Greenpeace protestors dressed as Polar Bears entered and Occupied the Edinburgh offices of Cairn Energy, in protest at the companies role in oil exploration off the coast of Greenland. It took 12 hours for Lothian and Borders Police to remove all the protestors, during which time they covered much of the building with thousands of yellow post-it notes bearing messages from supporters, and searched the building for Cairn's oil spill response plan.

Greenpeace video of the occupation.
Greenland has been the subject of somewhat of an oil rush of late; in addition to Cairn Energy and the Greenland national oil company Nunaoil, four other companies are currently exploring for oil and gas in Greenland waters, the Danish giant Dong Energy, Chevron, ExxonMobil and the Canadian company Husky Energy. There has been speculation about, and occasional exploration for, oil in Greenland waters since at least the 1970s, but only recently has there been interest on such a scale.
This has been caused by a combination of factors. Firstly the price of oil has risen sharply in recent years as existing oil fields have become depleted and expanding Asian industry has driven up demand. This is particularly important for Greenland as extracting oil under arctic conditions is likely to be expensive; the figure of US$50 per barrel has been quoted, compared to $4-$15 in the Middle East and North Africa. At the same time Greenland is trying to gain more independence from Denmark (of which it is a colony); the Greenland economy is essentially dependent on aid from Denmark, it gains some revenue from fishing and tourism, but not enough to achieve meaningful financial freedom; hydrocarbons could potentially do this. 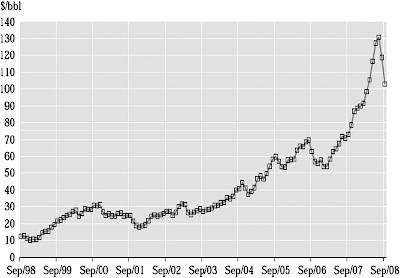 Oil price per barrel in US$ from 1998 till 2008.
The United States Geological Survey (USGS) estimates that Greenland could have off-shore oil reserves of 52 billion barrels of oil; more than Libya, Nigeria or the North Sea. Up to 30% of the world's remaining oil may lie within the Arctic Circle, and oil exploration companies have been active across the region. Some representatives of the oil industry have even spoken of the prospect of melting arctic sea ice due to global warming as an opportunity, since this will make oil in arctic waters more accessible.

The Arctic's Oil Reserves, in billions of barrels, as estimated by the USGS.
This has caused a great deal of concern to environmentalists, who view arctic ecosystems as particularly vulnerable to environmental disturbance. There have been problems with pollutants from other parts of the world; sea currents, atmospheric currents and rivers all carry pollutants to the arctic, where they become trapped in the arctic ice, remaining in the ecosystem for longer than would be possible in other parts of the world. Since the arctic sits at the top of the globe, it occupies a smaller area than other climate zones; thus pollutants are concentrated as they move northward. This has lead to the build up of pollutants in arctic food chains, where top predators such as polar bears being particularly vulnerable. This also lead to the build up of PCBs which damaged the o-zone layer in the arctic and antarctic atmospheres; the chemicals were no more dangerous at high latitudes, they simply became more concentrated, and therefore more dangerous, there.
This vulnerability in arctic ecosystems makes the prospect of large scale oil spills particularly worrying. The arctic is an inherently difficult environment to work in, with extreme weather conditions and floating ice bergs presenting hazards to shipping. The oil industry has a patchy record on dealing with oil spills, having on occasion been apparently incapable of dealing with large scale oil spills. On 20 April 2010 a explosion on the Deepwater Horizon in the Gulf of Mexico lead to 11 deaths and left a fractured pipe pouring into the waters of the Gulf which British Petroleum (the operators of the rig) were unable to cap until 15 July, by which time 4.9 million barrels of oil had been lost. It is likely that any such oil spill in the arctic would be much harder to contain, and far more devastating to the environment.
With this in mind, it is likely that protests about arctic oil exploration are likely to continue. Greenpeace and Cairn Energy have a history of confrontations; Greenpeace activists have previously occupied Cairn's instillations in the Arctic, to which Cairn have responded by taking out an injunction in a Dutch Court. Since Monday's occupation Cairn have obtained an injunction in the UK preventing Greenpeace activists from distributing material on Facebook or Twitter relating to the Edinburgh occupation, apparently concerned that Greenpeace may have got hold of a copy of their secret oil spill response plan.
This seems a little naive. Greenpeace are an experienced group, and have fought long battles against bigger organizations than Cairn. Even if Cairn did manage to deter them there are many other groups that could potentially fill their place. Assuming that Cairn oil don't intend to pull out of arctic oil exploration they could probably take some advice on public relations.
See also Drilling for oil on the Ningaloo Reef and Rethinking Energy.
Posted by Joe Bauwens at 22:18