On 11 March 2011 the Tōhoku Coast of northeast Japan was devastated by an Earthquake with a magnitude of 11 on the Richter Scale, and the tsunami that it triggered (a tsunami is a huge wave caused by an Earthquake or landslide), which reached heights of over 40 m in places and travelled up to 10 km inland. This was the most devastating Earthquake ever to strike Japan, and one of the largest Earthquakes ever recorded.
Video footage of the 11 March Tsunami striking a Japanese coastal town.
In total the earthquake and tsunami are known to have killed 15 844 people, with another 3451 missing and 5890 injured. It devastated coastal towns across eighteen prefectures, destroyed a nuclear power station, a dam, around 125 000 buildings and the infrastructure of a large area of northeast Hokkaido.
As a consequence of this devastation, around 18 million tonnes of debris was washed into the Pacific Ocean, and has been drifting eastward (the prevalent current direction in the North Pacific) ever since. In October 2011 Jan Hafner and Nikolai Maximenko of the International Pacific Research Center at the University of Hawaii calculated that the debris would cover an area roughly 3200 km by 1600 km and would reach Hawaii in early 2013 and British Columbia in 2014, with debris eventually washing up from Alaska to Baja California. This model seemed to have been confirmed when the debris field was observed in the area predicted by the Russian tall ship STS Pallada. 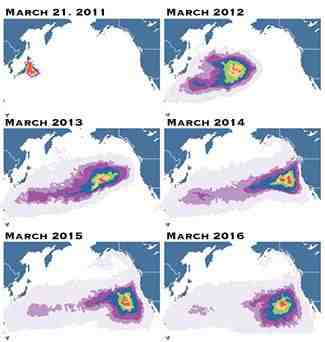 The path of the debris from the 2011 Tsunami, as predicted by the University of Hawaii Team.
Around the beginning of December 2011 reports started to come in of debris from the Tsunami being washed up on the shore of Vancouver Island, around the town of Tofino. At first the local authorities dismissed this, floating rubbish from Japan and China is a regular occurrence on the coast of British Columbia, but by the end of month it was becoming clear that there was a lot more being washed up than usual, and that the items arriving were different from the usual waste; personal items rather than bottles and packaging, and a large amount of timber. 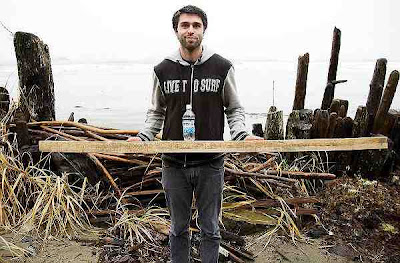 Timber bearing markings identifying it as coming from Japan on beach near Tofino.
Local Mayor Perry Schmunk has been in contact with a number of Canadian governmental agencies in order to develop a plan to deal with any further increase in the debris arriving. Tofino residents have expressed concern at the possibility of radioactive waste from the Fukushima Nuclear Power Plant or even human remains arriving on the local beaches, though the United States National Oceanic and Atmospheric Administration have described this as unlikely.
See also Rethinking Energy, Magnitude 7.1 Earthquake off the Sanriko Coast, Magnitude 6.4 Earthquake off the coast of Honshu, Earthquake off the coast of Vancouver Island and Earthquakes on Sciency Thoughts YouTube.
Posted by Joe Bauwens at 19:35