Earthquake off the coast of Vancouver Island. 9 September 2011.

On Friday 9 September 2011, just after 12.40 pm local time, an earthquake occurred roughly 20 km off the Pacific Coast of Vancouver Island, roughly 250 km east of Vancouver City. The quake was measured as having a depth of 23 km and a magnitude of 6.4 on the Richter Scale by the United States Geological Survey. This caused shaking that was felt across much of coastal British Columbia and Oregon. There are no reports of any damage or casualties, probably due in part to the remote location of the quake, and no tsunami warning has been issued. 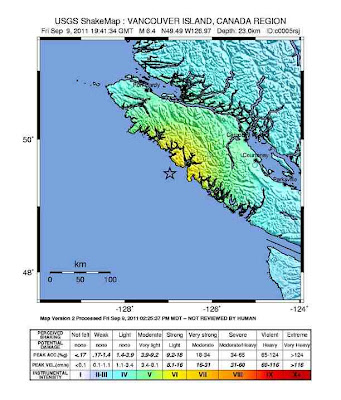 Vancouver Island is located to the northeast of a subductive plate boundary, where the Juan de Fuca and Explorer Plates are being subducted beneath the North American Plate. The Explorer and Juan de Fuca Plates are remnants of an ancient oceanic plate, the Fallaron Plate which has almost completely disappeared beneath North America. The Fallaron Plate formerly diverged from the Pacific Plate along the Fallaron Ridge, but as the plate has been subducted both it and the ridge have broken up. The remnants of the plate are now the Explorer Plate in the north, then the Juan de Fuca Plate, then the Gorda Plate in the south. This borders onto the Pacific Plate along the Mendocino Fracture Zone, which extends on land as the San Andreas Fault.

The tectonic margins along the eastern coast of North America.
The Juan de Fuca Plate does not flow smoothly beneath Vancouver Island, but moves in a series of stops and starts as the rocks stick to one another then move suddenly once the pressure builds up sufficiently. This has lead to some spectacular quakes, most notably the 1949 Queen Charlotte Islands Earthquake, which measured 8.1 on the Richter Scale and caused several landslides and widespread damage to property, the 1946 Vancouver Earthquake, which measured 7.3 on the Richter Scale, killed two people and damaged a number of buildings and the 1700 Cascadia Earthquake which had an estimated magnitude of between 8.7 and 9.1 on the Richter Scale, and triggered a tsunami which reached Japan and caused widespread devastation. 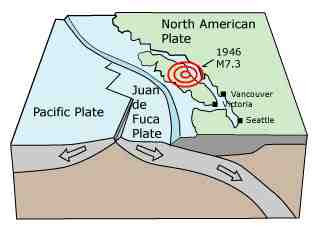 The epicentre of the 1946 Vancouver Earthquake, in relation to the Juan de Fuca subduction Zone.
If you felt this quake you can report it to the United States Geological Survey here.
See also Scientists predict eruption of Axial Seamount, Earthquakes in the Gulf of California and Earthquakes on Sciency Thoughts YouTube.
Posted by Joe Bauwens at 21:33