Ninety Six workers were forced to evacuate to underground shelters after a fire at a PotashCorp operated mine at Allan in Saskatchewan (about 40 km southeast of Saskatoon) on Wednesday 10 September 2014. The fire began at about 4.00 pm local time in a truck inside the mine, and apparently prevented the workers from evacuating, so they were instead relocated to safe areas within the mine (many modern mines have isolated safe areas with separate ventilation systems and communications, enabling miners to wait out exactly this sort of problem). None of the workers is reported to have been harmed, and the workers began to leave the mine at about 11.00 pm. Work has been suspended at the mine on Thursday 11 September, but is expected to resume on Friday. 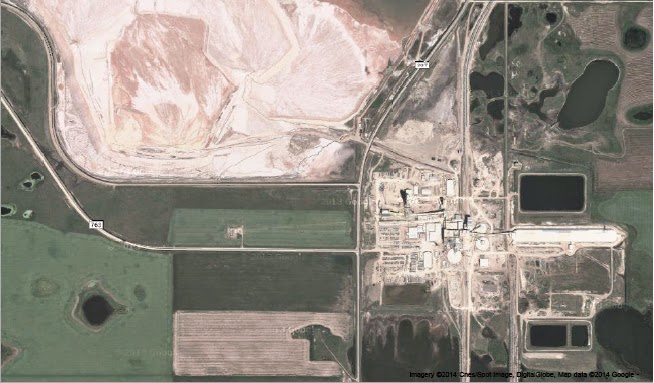 Satellite view of the Allan Potash Mine. Google Maps.

There are large reserves of potash (potassium salt), an important mineral in the production of commercial fertilizers, buried beneath the plains of southern Saskatchewan, though accessing these has proved difficult for mining contractors. The potash-bearing deposits are at their shallowest along a line that runs southeast from Saskatoon to Regina, where they are buried at a depth of approximately 1000 m. The deposits get deeper to the southwest of this line, reaching 1600 m at Belle Plaine (between Regina and Moose Jaw) and as deep as 3000 m bellow Montana and North Dakota. This depth in itself is not an insurmountable problem, but the deposits are also beneath the Blairmore Aquifer, at a depth of 400-600 m in the Saskatoon/Regina area, which needs to be sealed of by mining engineers sinking shafts to the potash deposits in order prevent flooding (water bearing strata can overlie dry strata as long as there is a water-impermeable layer, typically clay, in between). 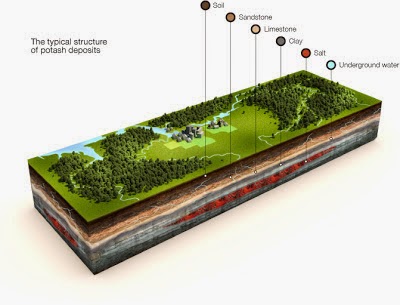 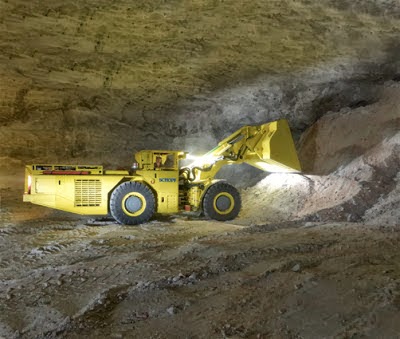 Three workers killed by gas at German potash mine.

Three workers have died and another four needed to be rescued after a controlled explosion at a Kali & Salz (K+S) GmbH operated mine near Unterbreizbach in Thuringia at about 1.10 pm local time (about 11.10 am GMT) on Tuesday 1 October 2013, which released an...

Four miners had to be rescued after a fire broke out at the Boliden Garpenberg Mine near Borlange in central Sweden at around 9.30...

Worker dies at Saskatchewan potash mine.

A 25 year old man from Newfoundland has died at the Agrium owned Vanscoy Potash Mine, approximately 32 kilometers southwest of Saskatoon, apparently after...