Sterkfontein Caves is a palaeoarchaological excavation site about 40 km to the northwest of Johannesburg in Gauteng State, South Africa, which forms part of the Maropeng Cradle of Humankind World Heritage Site has previously produced a large volume of early Hominin material (fossils of species more closely related to modern Humans than modern Apes), including to almost complete skeletons assigned to the species Australopithecus africanus (considered highly likely to be directly ancestral to modern Humans) and numerous more fragmentary specimens.

In a paper published in the South African Journal of Science on 26 May 2016, a team of scientists led by Gaokgatlhe Tawane of the Evolutionary Studies Institute and Centre for Excellence in Palaeosciences at the University of the Witwatersrand, describe an isolated first (top) rib from the Sterkfontein Caves site.

First ribs are considered important in palaeoanthopology, as the structure of this bone has changed in distinctive ways over the history of the Hominin group. Most notably in Modern Humans and all known fossil Hominins the first rib has a single articulation surface with the spine, whereas in all other Great Apes two such articular surfaces are present. The bone also reflects the shape of the rib cage, which has two different, and distinct shapes in different Hominins; narrow at the top and wider at the bottom in Great Apes as well as some small-bodied Hominins such as Australopithecus afarensis and Homo naledi, but straight in larger Hominins such as Australopithecus africanus, Homo erectus \and Modern Humans. 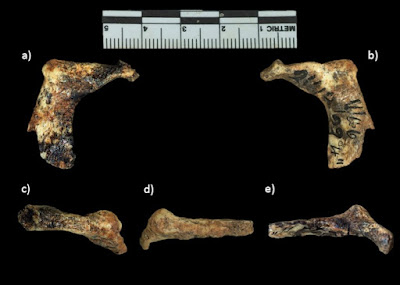 Tawane et al. carried out a morphometric analysis of the rib (a method used by palaeontologists that relies on comparing the ratios of different measurements to one-another rather than simply assigning the samples to groups based upon their obvious shape) in which it was compared to 33 Modern Humans (20 Europeans, 10 sub-Saharan Africans, 1 small-bodied member of the San population and 2 small-bodied individuals from the Andaman Islands), as well as 8 Chimpanzees, 3 Gorillas, 3 Orangutans and 3 Gibbons.

The rib had a singular articlar facet, confirming it as a Hominin (although curiously one of the European Modern Human specimens had two facets, generally though to be a more Ape-like configuration, suggesting the presence of a second facet cannot be used to rule out a rib having come from a Hominin). Morphometricly the specimen was found to be closest to Australopithecus sediba, then to Modern Humans, particularly the small-bodied individuals from the Andaman Islands, and was least similar to the Ape specimens. 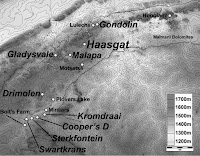 Dating the Haasgat Cave Deposits.              The Malmani Dolomite to the west of Johannesburg and Pretoria is host to a large number of cave systems that have formed from about 5.3 million years ago onwards. These caves are noted for a large volume of fossiliferous material, including many Hominin (species more closely related to modern Humans than... 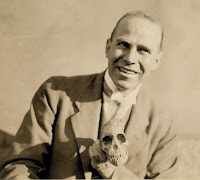 The first photographs of the Taung Child.   One of the most important breakthroughs in palaeoanthropology in the twentieth century was the discovery of the fossil known as the Taung Child, the first known specimen of Australopithecus, by Raymond Dart of the University of the Witwatersrand in South Africa in 1924. This discovery refocused efforts to find human ancestors on the African continent, where...