Gondwanagaricites magnificus: A new species of Mushroom from the Early Cretaceous Crato Formation of Brazil.

Fungi are the second most diverse group of Eukaryotic organisms (organisms with their genetic material contained within a nucleus), found in almost every ecosystem on Earth, and with a fossil record dating back 1430 million years. However almost all Fungal fossils are of spores, and the vast majority of the remaining specimens are the sexual stages of Ascomycete Fungi (‘Microfungi’; Moulds and Rusts etc.). Basidiomycote Fungi (‘Macrofungi’) produce more obvious fruiting bodies, such as Mushrooms, and are the Fungi most familiar to the public. There are about 30 000 extant species of Basidiomycotes, and the group has a fossil record dating back 330 million years, with molecular clock data suggesting they split from the Ascomycetes between 500 million and 1.2 million years ago. However to date only ten fossil Mushrooms have been described, all preserved as inclusions in amber, with the oldest coming from Middle Cretaceous Burmese Amber, and examples also known from Cretaceous amber form New Jersey, Eocene Baltic Amber and Miocene Dominican Amber.

The Crato Formation outcrops on the northern flanks of the Chapada do Araripe, a plateaux on the border between Ceará, Pernambuco andPiauí States in northern Brazil. In is noted for its exceptionally well preserved fossils, which include Dinosaurs, Crocodiles, Fish, Pterosaurs, Crustaceans, Arachnids, Plants and most notably Insects, which are present in large numbers, often showing exceptional preservation. These Insects are of particular interest as they date from a time in the Early Cretaceous when Flowering Plants were rapidly diversifying, and relationships between Insect and Plant groups that would come to dominate the Earth’s terrestrial biology were being formed.

The new Mushroom is named Gondwanagaricites magnificus, where ‘Gondwanagaricites’ means ‘Mushroom from Gondwana’ (Gondwana being an ancient supercontinent of which South America was a part in the Early Cretaceous), and ‘magnificus’ means ‘magnificant’. The species is described from a single specimen 10.0 mm in diameter and about 7.5 mm in height, on a 34.0 mm stipe (stem), with preserved gills but no spores. The specimen was found on a small slab thought to have come from one of the extensive quarry complexes near the town of Nova Olinda, with lithology consistent with the Nova Olinda Member of the Crato Formatiom, making it between 113 and 120 million years old, making it between 14 and 20 million years older than the previous oldest described fossil Mushroom. The specimen was formerly housed at the Illinois Natural History Survey, but has since been repatriated and is now housed at the URM Herbarium at the Universidade Federal de Pernambuco in Recife, Brazil. 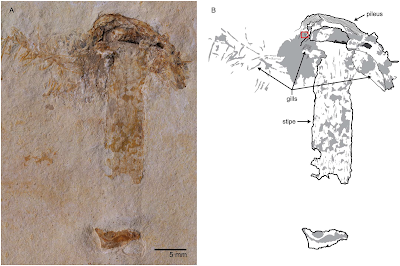 Gondwanagaricites magnificus. (A) Photomicrograph of holotype showing general habitus. (B) Interpretive drawing of (A) with major morphological features indicated. The red box indicates the position of preserved gills shown below. Heads et al. (2017). 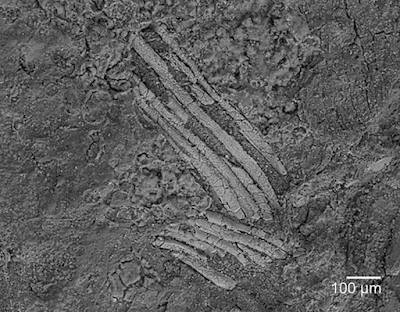 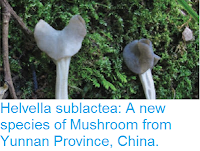 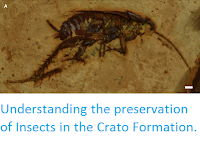 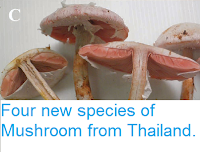 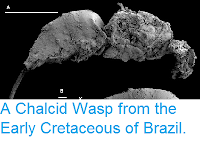 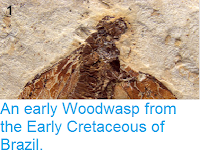