Males of two species of Horse-fly described for the first time.

Horse-flies (Tabanidae) are widespread True Flies (Diptera) noted for their vicious bite, with many species considered to be pests of humans and livestock. Female Horse-flies typically require a meal of mammalian blood prior to reproducing, but males, if they feed as adults at all (like all flies they metamorphose from a totally unflylike form on maturity), feed on nectar or pollen. Because of this many species of Horse-fly are described from female specimens only, with the males being unknown, since only the females are attracted towards humans and domestic animals.

In a paper published in the journal Zootaxa on 16 July 2012, Tiago Kütter Krolow of the Coordenação de Ciências Biológicas at the Universidade Federal do Tocantins, Keith Bayless of the Department of Entomology at North Carolina State University and Augusto Loureiro Henriques of the Coordenação de Pesquisas em Entomologia at the Instituto Nacional de Pesquisas da Amazônia describe the males of two species of Horse-fly previously only known from female specimens. Both species are widespread in South and Central America, but not well studied, and hence are not well represented in entomological collections.

The first species of Fly to have its male described is Eutabanus pictus, a predominantly black Fly considered to be a mimic of some forms of Flesh-fly (carrion eating Flies in the family Sarcophagidae) though the advantage to this is not clear. The males are described based upon specimens gathered in Brazil and Peru. The males are essentially similar to the females, but with with larger eyes and less prominent abdominal stripes. 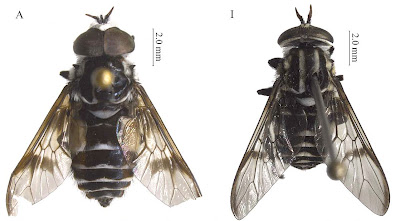 The second species is Myiotabanus muscoideus, a black and white fly, again considered to be a mimic of some forms of Flesh-fly. The males described are from Mexico (further north than the previously known range of the species) and Guatemala. Again the males are very similar to the females, though the males have a less pointed abdomen and larger eyes. 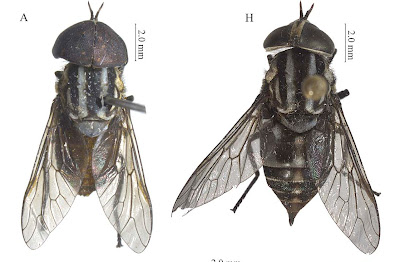