Cycas dharmrajii: A new species of Cycad from the Andaman Islands.

Cycads are an ancient group of Gymnosperm Plants thought to be among the closest surviving relatives of Flowering Plants. They originated in the Palaeozoic, and were once one of the most abundant plant groups on Earth, but were almost wiped out at the end of the Mesozoic, with all Cycads alive today being the result of a post-Cretaceous radiation. Of the 330 plus species of Cycad alive today, over a hundred are placed in a single widespread genus, Cycas, which is found in tropical and subtropical lowlands from Africa and Madagascar, across South and Southeast Asia to Australia and the islands of the South Pacific.

In a paper published in the Nordic Journal of Botany on 25 January 2017, Lal Ji Singh of the Botanical Survey of India describes a new species of Cycas from the Andaman Islands.

The Andaman Islands are a chain of volcanic islands on the edge of the  Burma (or Burmese) Plate, a small tectonic plate underlying the Andaman Islands, part of the eastern Indian Ocean and the western part of Sumatra. To the west of the Andaman Islands this plate is being subducted beneath the Indian Plate, but to the east the situation is more complex. The Burma Plate is being pushed northward relative to the Eurasia and the Sunda Plate (which underlies eastern Sumatra, Java, southern Southeast Asia, most of Borneo and the western Philippines) by the northward movement of the Indian Plate, but there is an area of seafloor spreading beneath the Andaman Sea (separating the Andaman Islands from Southeast Asia), which in turn causes stresses within the Burma Plate, leading to a zone of faulting upon which the volcanic islands and seamounts are situated.

The new Cycad is named Cycas dharmrajii, in honour of Dharm Raj Misra of the Department of Botany at the University of Allahabad. It forms trees up to 11 m in height and 62 cm in diameter, with a swollen base and branching trunks, unusual in a modern Cycad. It has been found only in the coastal lowland forests of North and Little Andaman Islands, where it is probably endemic. 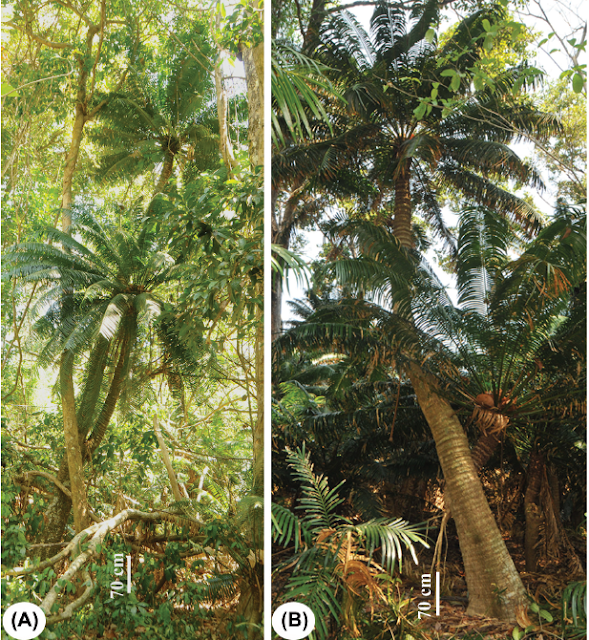