This May's edition of the journal Cretaceous Research saw a paper by Darren Naish and Steve Sweetman of the School of Earth and Environmental Sciences, University of Portsmouth in which they describe a neck vertebrae from a maniraptoran dinosaur. This was discovered by fossil collector Dave Brockhurst, at the Ashdown Brickworks Quarry at Bexhill in Sussex, and has been dated as belonging to the Valanginian Age (Early Cretaceous), or as being about 140 million years old(ish). If the identification is correct then this will be both the first maniraptoran dinosaur discovered in the UK, and one of the smallest non-avian dinosaurs (i.e. dinosaurs that are not birds) ever discovered. 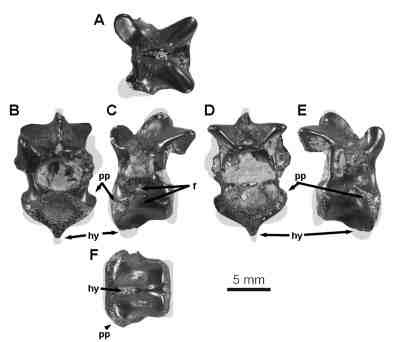 The single bone from which the Ashdown Maniraptoran was described, seen from a variety of angles.

Dinosaur finds have a reputation for being the only kind of scientific discovery that sells newspapers, and the story duly appeared in a number of papers (e.g. the Mirror, The Daily Mail, Huffington Post), though most of these relied heavily on the University's original press release. This is fair enough, vertebrate palaeontology is a fairly technical subject, and few papers have science corespondents equipped for in depth analysis. The fossil has also been discussed on specialist palaeontology blogs, such as those of senior author Darren Naish or dinosaur artist Matt Martyniuk, though these tend to be quite technical and aimed at other vertebrate palaeontologists. Thus there is a lack of a non-technical discussion of this (fairly remarkable) paper; one which having a background in palaeontology (though not dinosaur palaeontology) I shall attempt to fill.

What is a Maniraptoran?
The maniraptorans are a group of predominantly small theropod dinosaurs, including birds and those groups closely related to them; as such the maniraptorans are not extinct, though all non-avian groups died out during the Late Mesozoic (at least 65 million years ago). When palaeontologists talk about this fossil being the first maniraptoran fossil from the UK they are referring to non-avian maniraptorans.

The maniraptorans are distinguished by having a calcified breast bone (as opposed to a cartilage sternal plate), an elongated, three fingered hand, and a half-moon shaped bone in the wrist. The non-avian maniraptorans were the first group of dinosaurs in which feathers were well described, from remarkably well preserved fossils from Lioaning Province in China, although these have now been found in a wider range of dinosaur groups. Several groups have backwards-facing, bird-like hips.

The maniraptorans comprise six main groups, and a few extra specimens which don't fall precisely into any group. Their classification is likely to change in the future; many maniraptorans are small and known only from fragmentary remains, it is quite possible that new specimens will emerge that cause dinosaur specialists to review their current classification.

The Therizinsaurs are a poorly understood group with bird-like hips and adaptations for herbivory, they had three large, elongate claws on each hand, and specimens with feathers have been found. The smallest therizinsaurs were slightly over two meters long, the largest about twelve meters, and weighed over six tonnes (big for a theropod dinosaur. They were known only from fragmentary remains till the mid 1990s, and subsequently were variously classified as theropods, prosauropods of ornithischians. 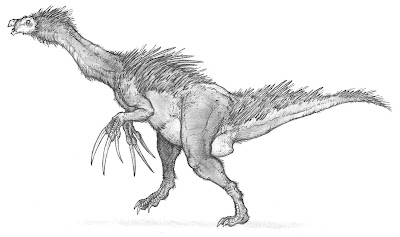 Reconstruction of the Therizinsaur Beipiaosaurus, by artist Matias Bofarull Oddo.
The Alvaresaurs are a group of small dinosaurs with elongated rear limbs and snouts (with very small teeth), and reduced fore-limbs, though their structure suggests these fore-limbs were very powerful, with large arm and breast muscles. Feathered specimens have been found. It has been suggested that the Alvaresaurs were adapted to digging into termite mounds or similar insect structures. Many Alvaresaurs are only known from partial specimens, making detailed reconstructions difficult, but those that can be reconstructed ranged in size from about 40 cm to about 2.5 meters. 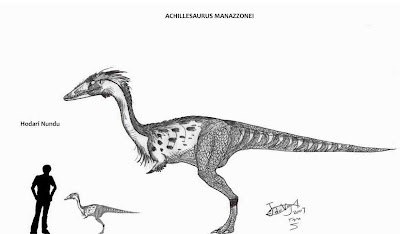 
The Oviraptosaurs are a group of maniraptorans with short tails, few or no teeth, and beak-like jaws. They ranged in size from about 15 cm to about 8 meters, though as with other groups many species are known only from fragmentary remains, so this range might be extended. Feathers have been discovered on specimens of several species. Some dinosaur specialists consider the Oviraptosuars should be classified as being true birds. 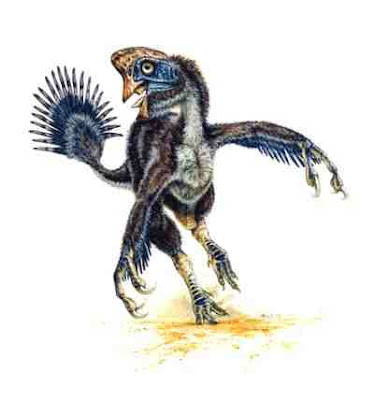 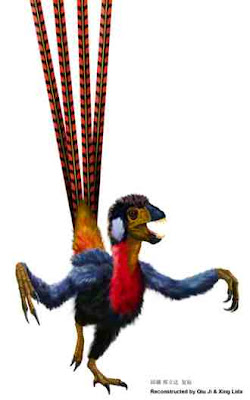 A reconstruction of Epidexipteryx by Qui Ji and Xing Lida.

The Troodontids have larger brains for their size than any other known dinosaur group, comparable to modern birds and larger than Mesozoic forms. They also had large forward facing eyes, and enlarged middle ears, implying acute senses. The ears were slightly asymmetric, a trait also known from owls, which suggests that they may have had a similar ability to pinpoint sounds. They had retractable or semi-retractable claws on their second toes. Troodontids ranged in size from about 30 cm to about 2.4 meters in length. Feathers are well documented in the Troodontids. 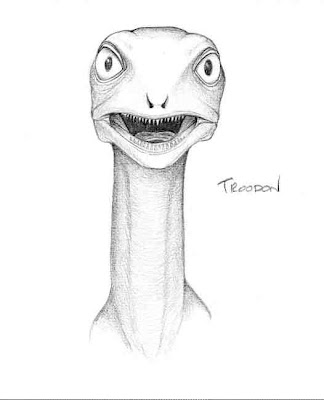 Illustration of Troodon by Dr Anne Musser of the Australian Museum.

The Dromaeosaurs were bipedal dinosaurs with well developed retractable claws on their second toes, fore-limbs that could be folded close against their bodies and elongate, rigid tails. Most if not all species appear to have been feathered and some species may have been able to fly. They ranged in size from about 70 cm to over 8 meters in length. The Dromeosaurs are often encountered in popular culture as 'raptors'. 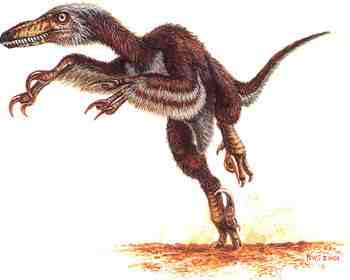 A reconstruction of Velociraptor by dinosaur artist Michael W. Skrepnick.


Where did it live?
The fossil was found in the Ashdown Formation, part of the Wealden Group, a Lower Cretaceous sequence of rocks from southern and eastern England and running out under the North Sea. The Wealden Group represent subtropical coastal plains and shallow marine environments. The Ashdown Formation are sand and mudstones from braided river formation, possibly an environment similar to the Lower Mississippi, Senegal, Ganges or Murray-Darling river basins. On the whole smaller vertebrates have lower preservational potential than large ones, since their skeletons are more easily broken up. In an environment such as a river basis whole skeletons from small animals are unlikely to survive, but individual bones stand a good chance of being fossilized.

How confident is the diagnosis?
Claiming a dinosaur group was present in an area where it was previously unknown from a single bone is a bold step, and mistakes have been made in the past, but this does not mean the diagnosis is wrong. In the nineteenth century it was common to describe each new bone discovered and formally name it. Since precedence is important in naming fossils, this meant that a palaeontologist who had painstakingly reconstructed a complete animal could well lose the right to name this to an amateur fossil hunter who had found a single bone. Unsurprisingly this way of doing things fell into disrepute, and for much of the twentieth century palaeontologists ignored isolated bones. Naish and Sweetman are clearly aware of this, and have declined to name a species on the basis of this bone. They have, however, been able to make some deductions from the bone.

Dinosaur vertebrae are quite distinctive to a specialist, and bones from the different parts of the spine can also be identified with confidence, so the diagnosis of the bone as a neck bone from a small dinosaur is probably reasonable. The bone appears to have stopped growing, supporting their analysis of it as an adult bone, suggesting that this does indeed come from a small species, though exactly how small is hard to judge; a reconstruction based upon a typical maniraptoran gives a length of 30-50 cm, though if it belongs to a different group then this would be different. The bone has a distinctive 'x' shaped profile, which has been observed in Oviraptorsaurs, on the basis of which Naish and Sweetman conclude that the bone is a dinosaur bone, most likely to be a Oviraptosaur, and if not then likely to be a closely related Maniraptoran. It is possible that the bone does come from a different form of dinosaur, but this would be a more remarkable find, since no other dinosaur group is known to produce specimens this small, or with this bone structure.

See also An Australian Spinosaurid,
Head-Butting in a Pachycephalosaur
and Dinosaurs on Sciency Thoughts YouTube.
Posted by Joe Bauwens at 21:00