HOPS-68 is a protostar located in the Orion Nebula, 1450 light years from Earth. Stellar nebulae are vast cloud of gas and dust floating in space, thought to have been formed by the deaths of earlier stars. Protostars are areas within stellar nebulae that have started to fall in on themselves due to gravity; effectively new stars being born.

Protostars have a roughly whirlpool shaped structure, with a disc of material being sucked in and accreted onto the forming core (this is a vast oversimplification). Due to gravitational effects, not all the material falls directly onto the new star; some of it is slung out in two massive plumes at the north and south poles. These are usually the only visual features of protostars, since the core remains hidden at the centre of a dark accretion disk, but the superheated plumes can stick out far (sometimes light years) on either side. 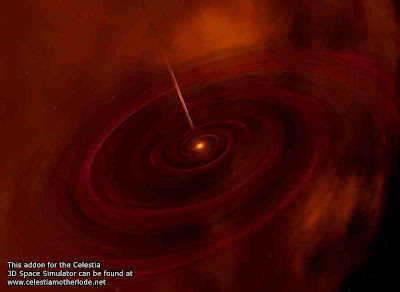 An artist's impression of a protostar.


On April 19 this year a paper appeared in the Astrophysical Journal Letters from a team lead by Charles Poteet and Thomas Megeath of the University of Toledo, detailing the results of a spectrographic study of the Protostar HOPS-68 using the Spitzer Space Telescope. This found the presence of the mineral forsterite (Mg2SiO4), a form of olivine, apparently being ejected in the plumes then falling back into the accretion disk. Poteet et al. theorized that this was forming in heat caused by friction between atoms and molecules in the inner part of the accretionary disk.

Olivine is a common mineral in both the Earth’s crust and in meteorites, it is a mixture (technically a solid solution) of magnesium silicate (forsterite, Mg2SiO4) and iron silicate (fayalite, Fe2SiO4). Olivine is greenish in colour, and there have been some news stories and pictures of green crystals around HOPS-68. In fact it is the iron that gives olivine its green colour; forsterite, which lacks iron, is colourless. 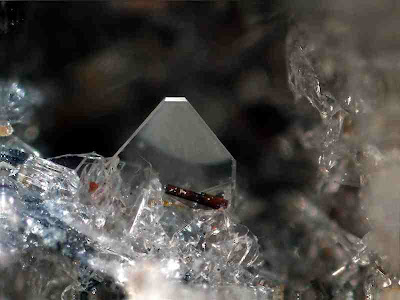 Olivine forms at relatively low pressures. It is one of the most abundant minerals in the Earth’s crust and upper mantle, but bellow a depth of 400 km magnesium-iron silicate forms different minerals, depending on the depth; these can be used to infer the depth at which rocks formed. Only the olivine form is ever found in meteorites.

Olivine has long been known in meteorites, and was found in the comets Wild 2 and Temple 1 by the Stardust rocket space probe, so its discovery around a protostar was not that much of a surprise. It had previously been thought that meteors containing it might be remnants of larger bodies, which could have had a liquid phase similar to terrestrial lava or magma in their evolution, but comets are mostly ice, and are thought to stem from a much earlier stage in the solar system’s evolution, they are remnants of our own protoplanetary disk; geologists can date rocks by a variety of techniques, and do not believe any olivine found in our solar system predates the system itself. Poteet et al.’s suggestion that olivine crystals could form by friction within the central part of an accretionary disk very early in a solar system’s evolution, then be ejected into other parts of the disk would solve this problem.