Scientists have known that some dinosaurs had feathers for a long while. Archaeopteryx, generally described as the 'first bird' was discovered in 1861, and was quickly recognized as being very similar to a small, feathery dinosaur. Since nobody (sane) thought that evolution would produce a feathery bird from a featherless dinosaur in a single generation, scientists have known that at least some dinosaurs had feathers.
In the 1990s well preserved fossils of feathered, non-avian dinosaurs in fine grained lakebed sediments began to emerge from Liaoning in China. These sediments were rich in volcanic ash, allowing for both very fine preservation and excellent dating potential. These specimens detailed a variety of small therapod dinosaurs with a variety of plumage. 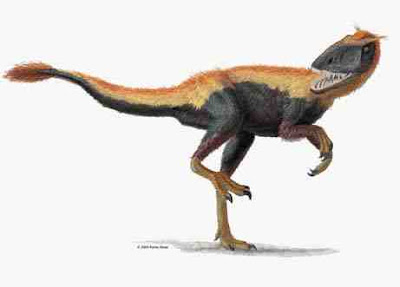 Reconstruction of Dilong paradoxus, an early tyranosaurid dinosaur with primitive, hairlike feathers from the Liaoning Formation of northwest China. Illustration by artist Portia Sloan.
However these fossils, while of excellent quality, only preserve impressions of the feathers, they give no indication of their colour or three-dimensional structure. The 16 September edition of the journal Science contains a paper by a team lead by Ryan C. McKellar of the Department of Earth and Atmospheric Sciences at the University of Alberta in which they describe the discovery of a number of Cretaceous era feathers from amber (the preserved resin of coniferous trees) found in mine tailings at Grassy Lake in eastern Alberta, Canada. 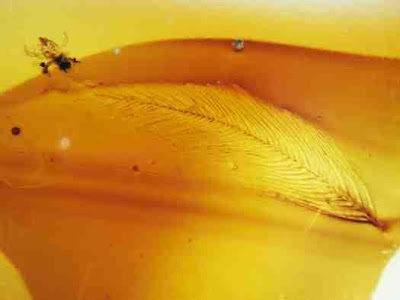 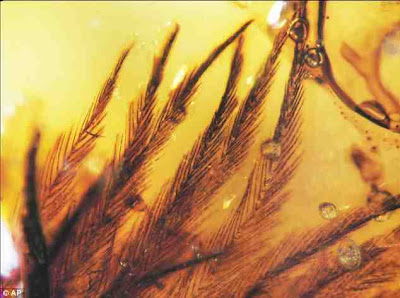 Forked feathers, a form unknown in true birds.
These feathers have been widely described as showing the colour of dinosaurs. They show a range of browns and yellows, colours often seen in reconstructions of feathered dinosaurs. Artists have tended to use these colours because they are common in modern feathers, and are common colours for savannah animals, and the fossils apparently confirm the theories of the artists. However amber is a yellowish-brown rock, and almost anything preserved in it will appear this colour, so little can be inferred from this. 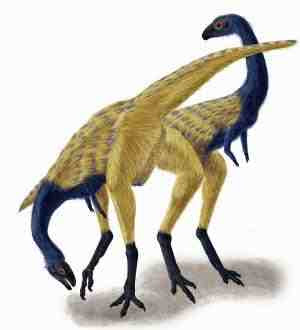 Illustration of Limusaurus inextricabilis, a small Jurassic ceratosaur from Liaoning. Illustration again by Portia Sloan, who has coloured much of the reconstruction brown, as with D. paradoxus, above.
However another paper in the same edition of Science attempts to throw some light upon this. This details how a team lead by Roy Wongelius of the School of Earth, Atmospheric and Environmental Sciences at the University of Manchester have developed an X-ray technique to search for traces of specific metals in pigment residues, enabling them to make inferences about the original colour of the pigment (for example the presence of copper would imply a green colour). This has been used to reconstruct the coloration and patterning of (amongst other things) two Jurassic birds, the crow-like Confuciusornis sanctus and the grebe-like Gansus yumenensis.

See also Giant bird from the Cretaceous of Khazakhstan, Head-butting in a Pachycephalosaur and Dinosaurs on Sciency Thoughts YouTube.