A new species of Corythoderine Scarab Beetle from Cambodia.

Scarabs of the Tribe Corythoderini are small Beetles found living in the nests of Termites, found across much of Africa and south Asia. They are tolerated by the Termites, and apparently produce secretions which the Termites use in some way, though the relationship is not well understood.


In a paper published in the journal Zootaxa on 20 November 2012, Munetoshi Maruyama of the Kyushu University Museum describes a new species of Corythoderine Scarab Beetle from Angkor Wat in Cambodia, the first time a member of the group has been found in the country.

The new species is named Eocorythoderus incredibilis, meaning the Incredible Dawn-Corythoderine (dawn because this is the furthest east any member of the group has been found. It is a millimeter long, flightless brown Beetle, found living in the fungus-gardens of the Termite Macrotermes gilvus, the first time a Corythoderine has been found living with a Termite in the genus Macrotermes; they are more usually associated with the genus Odontotermes. 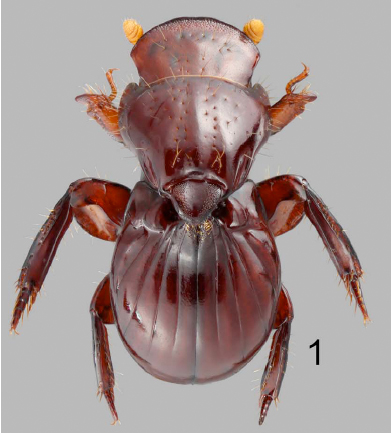 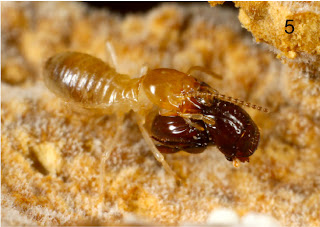 Eocorythoderus incredibilis (Top) being carried by a Termite. The Beetle retracts its legs while being carried, and the Termite caries it by a projection on its back, similar to one found on Termite nymphs, (Bottom) in lateral view, with arrow indicating the projection by which the Termite carries it. Maruyama (2012).