Insect dispersal in a Miocene Springtail.

Springtails (Collembola) are wingless Insects (or not, some modern taxonomists classify them as non-Insect Hexapods), considered to be extremely ancient members of the group; unlike wingless Insects such as Ants of Fleas they are thought to have diverged from other Insects before the evolution of wings, not to have secondarily lost them. Springtails are found throughout the world, and are among the first organisms to colonize newly formed islands, though their dispersal methods are not properly understood.

In a paper published in the journal PLoS One on 17 October 2012, a team of scientists led by David Penney of the Faculty of Life Sciences at The University of Manchester describe a preserved Springtail attached to the wing of a Mayfly preserved in 16 million year old amber from the Miocene of the Dominican Republic.

The Springtail is attached to the Mayfly using its antennae, a form of behavior not known in modern Springtails. On its own this would not be considered very good evidence for such behavior, but a previous fossil has been described from Eocene Baltic amber, in which a number of Springtails are attached to the leg of a Harvestman. Penney et al. suggest that this implies the behavior is probably found in modern Springtails, but that it has yet to be recorded. 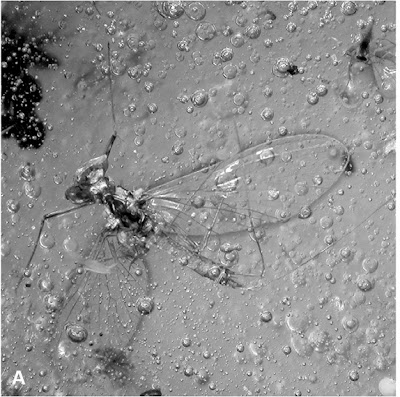 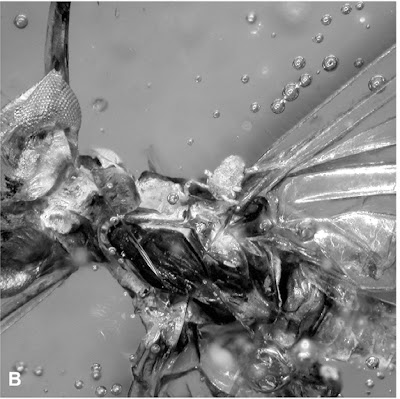 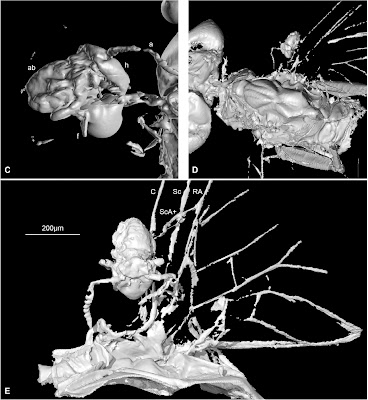 See also Goblin Spiders from Cretaceous Amber, A new species of Scorpionfly from Baltic Amber, Miocene Quasimodo Flies in Dominican Amber, A fossil Cricket in Miocene amber and A new species of Mayfly from western Ecuador.