A court in the Hague ruled that the Shell Petroleum Development Company of Nigeria Ltd., a subsidiary of oil company Shell must pay compensation to a Nigerian farmer for an oil leak that damaged fish ponds in his village. The damage was caused by a leak from a disused wellhead, dubbed the 'Christmas Tree' by locals because of its shape, which sprayed oil into fishponds in Icot Ada Udo village in the Niger Delta, belonging to farmer Friday Alfred Akpan, killing his fish and rendering the ponds unusable. 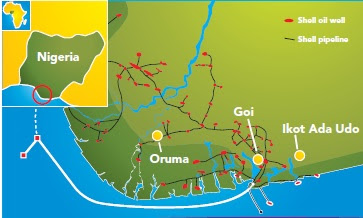 The location of Ikot Ada Udo, and other villages involved in the case. Milieudefensie/Friends of the Earth Netherlands.

The wellhead was installed in the 1960s as part of an exploratory drilling program, then capped off and effectivelly abandonded when it was decided it would not be profitable to extract oil from the site. It began to leak in the 1990s; workers from Shell coming out when called upon by villigers to cary out ad-hoc repairs. This persisted until August 2007 when the Christmas Tree began to spray oil across the village. This (unsurprisingly) lead to disagreement between the villagers and Shell Nigeria, resulting in no work being carried out until government mediators became involved, with the leak finally sealed in November 2007. 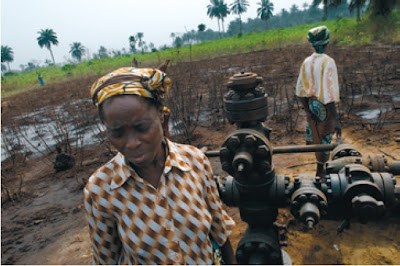 Shell did not attempt a clean-up in the village until September 2008, by which time the rainy season had come, spreading the oil into fields and fishponds and contaminating the local water suply. Shell Nigeria provided the village with a water tank and pipes, but did not compensate them for the damage to crops and fish ponds.

This prompted Milieudefensie (Friends of the Earth Netherlands), working with NGO partners in Nigeria, to file a case on behalf of Mr Akpan in the Hague against both Shell Nigeria and its Anglo-Dutch parent company, along with four other cases on behalf of villagers in the Delta which the court rejected. Shell had argued that the spill was the result of sabotage, but the court rejected this on the grounds that Shell had an obligation to make the wellhead safe agianst such actions. Milieudefensie now plan to bring actions on behalf of other villagers in Ikot Ada Udo village, and ar considering appealing the other cases. Shell is also currently facing a law suit in London on behalf of 11 000 members of the Bodo community, who were affected by a major spill in 2008.