Twenty-eight miners reported dead after explosion at Chinese coal mine.

Twenty-eight miners are reported to have died in a gas explosion at the Babao Coal Mine in Jilin Province, in the far northeast of China, at 10.40 pm local time (1.40 pm GMT) on Friday 29 March 2013. A further 13 workers suffered miner injuries; rescuers are not looking for any further people. 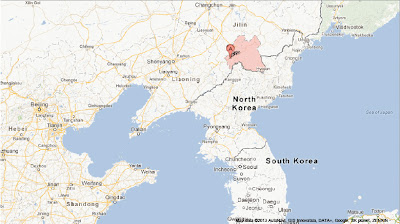 The location of the Babao Coal Mine. Google Maps.

Gas explosions in coal mines are an unpleasantly common event. Coal is formed by the compression and heating of plant matter in deeply buried sediments. The remaining coal is mostly carbon, with other elements that  were present in the original material being squeezed out by the pressure. However if these are not able to escape they will be trapped as pockets of gas, typically a mix of methane, hydrogen, carbon monoxide, water vapor and volatile hydrocarbons.

China gains 70% of its energy from coal-burning power stations, which places the country under great pressure to maintain coal supplies. This has led to a poor safety record within the mining sector, particularly in the private sector, where there is a culture of seeking quick profits in poorly regulated (and often officially non-existent) mines. State owned mines are often thought to be better regulated, but still compare badly to mines in other parts of the world; the Babao Coal Mine is run by the state-owned Tonghua Mining Group.