Earthquake under the Lleyn Peninsula.

On Friday 22 March 2013, slightly before 1.00 pm, GMT, the British Geological Survey recorded a Magnitude 2.2 Earthquake at a depth of 12 km beneath the Lleyn Peninsula in North Wales, roughly 20 km west of Porthmadog. This is not a large Earthquake, and occuring at this depth in a fairly remote location, it is quite likely that this event was not witnessed by anyone, and it is highly unlikely to have caused any damage or injuries. 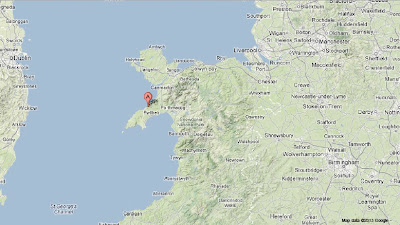 The location of the 22 March Earthquake. Google Maps.


Small Earthquakes are not uncommon in the UK, though more serious events are rare; there has only ever been one recorded Earthquake-related death in Wales, in 1940, when an elderly woman fell down a flight of stairs in Porthmadog.


The precise cause of Earthquakes in the UK can be hard to determine, with most probably being the result of the interplay of more than one source of tectonic stress. The UK is being pushed to the east by the expansion of the Atlantic Ocean (allong with the rest of Eurasia) and to the north by the impact of Africa into Europe from the south. It is also affected by lesser spreading centers beneath the North Sea, Rhine Valley and Bay of Bicay. Finally it is subject to glacial rebound; until about 10 000 years ago much of the north of the country was covered by a thick layer of glacial ice, pushing the rocks of the British lithosphere down into the underlying mantle. These rocks are now rebounding (slowly) into place, causing the occational Earthquake in the process. This is particularly true in the north and west of the country, with Earthquakes being most common on the west coast of Scotland.

Witness accounts can help geologists to understand Earthquakes and the geological processes that cause them. If you felt this quake, or if you were in the area but did not (which is also useful information) then you can report it to the British Geological Survey here.