The  Observatorio Vulcanologico y Sismologico de Costa Rica-Universidad Nacional in Costa Rica reported a large phreatic eruption on Mount Poás, a volcano in the central part of the country, slightly after noon local time (slightly after 6.00 pm GMT) on Tuesday 25 February 2014. Phreatic eruptions occur when magma or other very hot material is produced by a volcano in direct contact with water, in this case beneath the surface of a crater lake, causing a large volume of the water to convert immediately to vapor, resulting in an explosion. On this occasion the eruption resulted in a blast which through material over 300 m into the air. 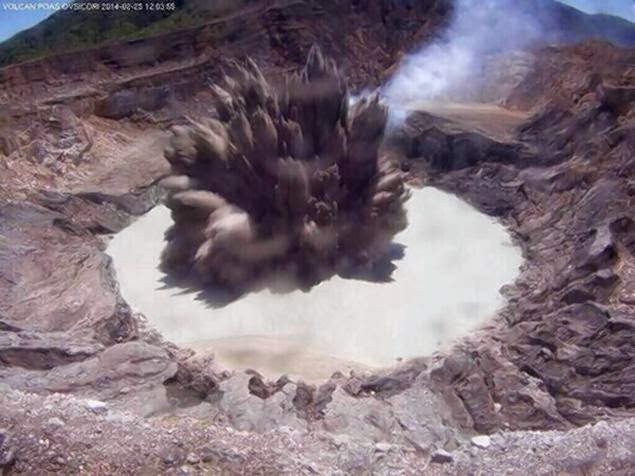 Costa Rica, along with the rest of Central America, likes on the southwest margin of the Caribbean Plate. To the south the Cocos Plate is being subducted along the Middle American Trench, passing under Central America as it sinks into the Earth. As this happens it is heated by the friction and the warmth of the planet's interior, causing it to partially melt. Some of the melted material then rises through the overlying Caribbean Plate, fuelling the volcanoes of Central America.
See also Magnitude 6.0 Earthquake off the coast of northwest Costa Rica, Eruption on Mount Turrialba, Costa Rica, Eruption on Mount Poás, Costa Rica and Substantial Earthquake in Costa Rica.