C/2002 VQ94 (LINEAR) was discovered by the Lincoln Near-Earth Asteroid Research (LINEAR) team at the Massachusetts Institute of Technology on 11 November 2002. It was originally classified as a Damocloid Family Asteroid (asteroids with eccentric, comet-like orbits that average more than 8 AU from the Sun and come no closer than 5.2 AU from the Sun), but was later reclassified as a Long Period Comet. The designation 2002 VQ94 implies the 2367th asteroid (asteroid Q94) discovered in the first half of November 2002 (period 2002 V), while C/ implies a Long Period Comet and (LINEAR) indicates the discoverer. 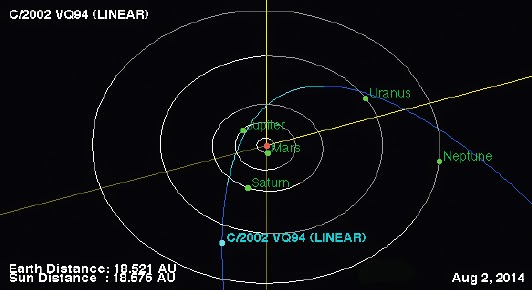 Cometary activity was first detected from C/2002 VQ94 (LINEAR) on 28 August 2003 by David Jewitt using the University of Hawaii 2.2-m Telescope, when it was 8.9 AU from the Sun (i.e. 8.9 times as far from the Sun as Earth is). Jewitt detected a distinct cometary halo (i.e. particles being shed from the bosy) and also calculated the comet to be 40.7 km in diameter.

The detection of molecular emissions from bodies this distant from the Sun has only been achieved for four comets previous to this; C/1961 R1 (Humason), 29P/Schwassmann–Wachmann 1, C/1995 O1 (Hale-Bopp) and the Centaur Chiron (expand), making this a significant discovery, leading to repeat observations of C/2002 VQ94 (LINEAR) 10 April 2007, when the comet was 7.33 AU from the Sun, and emissions of the ions CO+ and N₂+ were again detected, though the neutral molecules CN and C₃ were no longer detectable.

In a paper published on the arXiv database at Cornell University Library on 14 January 2014 and accepted for publication in the journal Icarus, Pavlo Korsun, Philippe Rousselot of the Observatoire des Sciences de l'Univers THETA at the University of Franche-Comté, Irina Kulyk of the Main Astronomical Observatory of National Academy of Sciences of Ukraine and Viktor Afanasiev and Oleksandra Ivanova describe the results of a series of follow-up observations of C/2002 VQ94 (LINEAR) using the 6-m telescope of the Special Astrophysical Observatory of the Russian Academy of Sciences in March 2008 and March 2009 and the 2.5-m Nordic Optical Telescope  at the Observatory del Roque de los Muchachos in June 2011 and July 2013.

In March 2008 C/2002 VQ94 (LINEAR) was 8.36 AU from the Sun. A cometary halo was still visible, and it was possible to detect the presence of CO+ and N₂+ spectrographically, and to determine the densities of these molecules within the coma (cloud of material around the comet), at 0.0572 grams per cubic meter for N₂+ and 0.00913 grams per cubic meter for CO+. In addition the comet was calculated to be producing dust (particulate solid material released by the sublimation of ice to gas; there is no liquid phase in a vacuum) at a rate of 10-20 kg per second.

In March 2009 C/2002 VQ94 (LINEAR) was 9.86 AU from the Sun. A cometary halo was still clearly visible, but it was not possible to perform a spectrographic analysis of this. The comet was calculated to be producing dust at a rate of 4-6 kg per second.

In June 2011 C/2002 VQ94 (LINEAR) was 13.40 AU from the Sun. A cometary halo was still faintly visible, though spectrographic analysis of this was not possible. The comet was calculated to be producing dust at a rate of 3-5 kg per second.

120"×120" extractions from the summarized images of VQ94. North, East, sunward direction, and scale bar are indicated. The vertical narrow box across the comet marks the position of the slit in the spectroscopic mode. Korsun et al. (2014). CO+ and N₂+ are likely to be derived from CO and N2 ices, which can only form at very low temperatures; laboratory experiments have suggested these ices can only accumulate at 25 K or less (-148˚C or less), and bodies containing them must have formed in a part of the Solar System where such temperatures occurred. Significantly three of the four comets recorded to have produced CO+ and N₂+ emissions are also members of the six known bodies that have produced detectable molecular emissions at distances of greater than 5 AU from the Sun.

Comet C/2013 UQ4 (Catalina) will reach its perihelion (the closest point on its orbit to the Sun) on Sunday 6 July 2014. The comet will be at its closet to Earth four days later, slightly before midday on...

Comet C/2014 E2 (Jacques) will reach its perihelion (the closest point on its orbit to the Sun)  on Thursday 3 July 2014, reaching its brightest in the sky (seen from Earth) a later in July, when it should...

Faye's Comet (Comet 4P/Faye) reached it's perihelion (the closest point in its orbit to the Sun) on 29 May 2014, for the first time in seven-and-a-half years. It presents no danger to the Earth, as it never comes within the orbit of Mars, and was not easily visible on this occasion, as the perihelion occurred on the far side of the Sun.