Hybridization between species is rare in animals, but a fairly common occurrence in many plants, with related plant species often having hybridization zones between populations of related parent species. How such hybridization zones occur without the two species is a subject of ongoing discussion among botanists, with three main theories having emerged. The Tension Zone theory suggests that the hybrids are less genetically fit than either parent species, but that the hybridization zone persists because there is no bar to hybridization between the two parent species, so that new hybrids are constantly produced, even if these do not thrive and reproduce. The Bounded Hybrid Superiority Theory suggests that the hybrids are unfit in the habitats favored by their parent species, but that they are more fit than their parents in the habitat where they occur, enabling them to thrive in a specific environment that the parents do not colonize; this theory allows for a thriving hybrid population even if the hybrids are sterile. Mosaic Hybridization is thought to occur where two species have an overlapping ranges containing a patchwork of different environments; in such circumstances a range of hybrid species can co-exist with the parents, each being suited to a different habitat.

Poplars, Populus spp., (also known as Aspens and Cottonwoods) are a widespread group of flowering trees in the Willow Family (Salicaceae), known for producing a range of hybrids, with a number of established trees in the genus also thought to have originated as hybrids. Hybridization in Poplars has previously been studied in Europe and North America, but the phenomenon has to date been little studied in Asia. Populus × jrtyschensis occurs naturally on the floodplains of the Erqis River in the north of Xinjiang Province, where it forms forests in which neither of its presumed parent species is present. The species is also widely planted along agricultural drainage channels, being easily cultivated as a clone from cuttings.

It is thought to be a hybrid of two distantly related species, the Black Poplar, Populus nigra, which is found from Europe and northwest Africa east to Central Asia, and which favors wet slopes near rivers at altitudes of 400-1000 m, and the Laurel-leafed Poplar, Populus laurifolia, which is found in Northern Asia south into parts of Central Asia, and favors dry slopes in the mountainous parts of river valleys, occurring from 400-1800 m, these tow species co-concurring in parts of Xinjiang Province. Although these species prefer different environments, they flower at the same time of year, April-May, and are wind-pollinated as well as having wind-distributed seeds, leading to the possibility of both hybridization and the colonization of environments not favored by either parent by the resulting hybrid young. 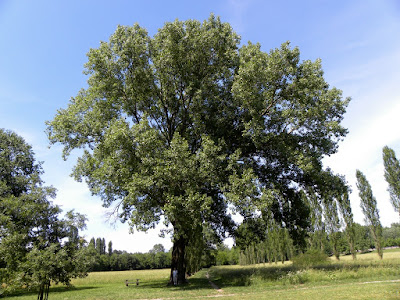 Jiang et al. took chloroplast and nuclear DNA samples from 566 trees from 45 different populations of the three different species in order to determine their relationships. They found that the chloroplast DNA (which is passed only through the female line) of Populus nigra and Populus laurifolia were easily distinguished, with 94% of Populus × jrtyschensis trees having Populus laurifolia chloroplast DNA (indicating descent from a female Populus laurifolia plant) and the remaining 6% having Populus nigra chloroplast DNA. Sequencing of the nuclear DNA of Populus × jrtyschensis suggested that 84% of these trees were first generation hybrids between parents of the two other species, while 6% were crosses between first generation hybrids and one of the parent species, and 10% were more difficult to ascribe parental backgrounds. Two trees were found to be clones, suggesting that one or both had grown vegetatively from a detached part of a first generation hybrid. 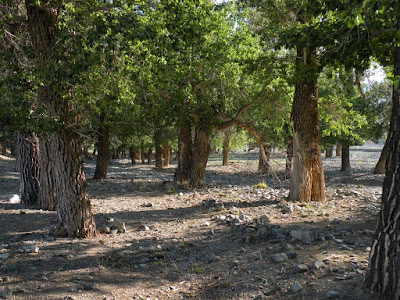 This suggests strongly that the population of Populus × jrtyschensis is maintained by a continuous supply of new hybrids between (usually male) Populus nigra and (usually female) Populus laurifolia flowers (Poplars usually produce separate male and female flowers on the same tree), with the trees themselves apparently having low fertility. However they had a distinct ecological niche, separate to that favored by either parent, growing on the floodplains of river valleys rather than higher on the side slopes. Examination of the sites where these trees grew revealed that the soil in which they grew also had far lower nitrogen levels than could normally be tolerated by either parent species, re-enforcing the idea that these trees have a unique ecological niche. 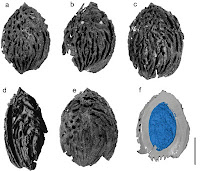 Prunus kunmingensis: Peaches from the Late Pliocene of Yunnan Province.                 Peaches, Prunus persica, are widely grown and consumed fruit around the world today, with a total annual production of about 20 million tons. They have a long historical association with humans, particularly in East Asia, with the oldest known... 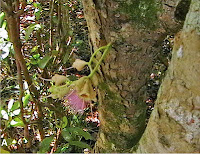 A new species of Rhododendron from Guizhou Province, China.              Rhododendrons, Rhododendronspp., are a large group of flowering shrubs and trees found in East and Southeast Asia and across Indonesia to northern Australia, and widely introduced elsewhere...
Follow Sciency Thoughts on Facebook.
Posted by Joe Bauwens at 21:46