Many Flowering Plants use Insect vectors to carry pollen from one flower to the next. The majority of these use brightly coloured flowers and strong scents to communicate directly with the Insects, providing the vectors with a food source, such as nectar or excess pollen, in return for their services. However between four and six percent of Flowering Plants use a different strategy to attract pollinators, relying on deception to attract Insects that would not otherwise visit flowers. This has two distinct advantages over the more usual method, firstly the Flower is able to avoid paying the pollinator with a reward of food, and secondly the pollinator is unlikely to carry the pollen to inappropriate flowers, as it has no interest it flowers as such, but are being lured to the Plant as they try to follow some other instinct.

Other members of the genus Ceropegia are known to use deceit to attract Flies (Diptera) as pollinators, and the flowers of Ceropegia sandersonii are known to be visited by small Flies (rather than more typical pollinating Insects, making it a potential deceptive pollinator.

Heiduk et al. recorded Flies visiting these flowers, finding a variety of Dipteran goups present, but only members of two families, the Grass Flies, Chloropidae and Jackal Flies, Milichiidae, carried pollinaria. These Flies were also the largest Flies visiting the flowers, suggesting that these are the only visitors large enough to dislodge the pollinaria from the flowers. The most abundant Flies were members of the genus Desmometopa (Milichiidae), with about 26% of these flies carrying pollinaria. 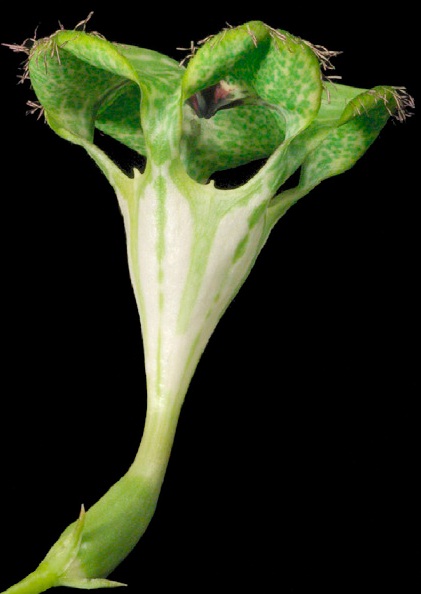 Flies of the genus Desmometopa are kleptoparasites, which is to say they rely on food stolen from another animal for food; specifically in this instance the females feed on the bodily fluids of Bees caught by spiders as a source of nutrients prior to laying their eggs. They do not feed on pollen or nectar, and do not otherwise visit flowers. 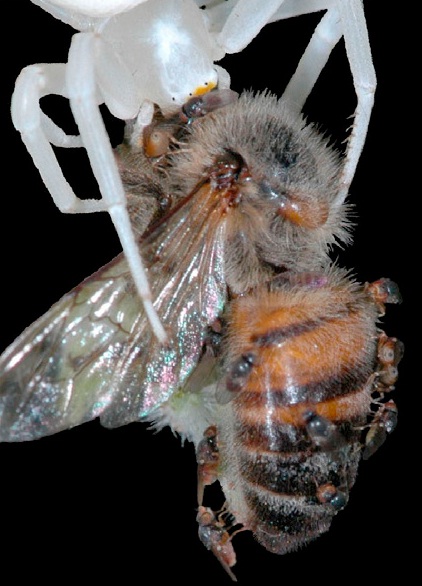 Honeybee being eaten by a Spider, with kleptoparasitic Flies feeding on fluids leaking from the Bee. Heiduk et al. (2016).

How these Flies find their prey has not previously been established, though it is generally thought that they are attracted to odours produced by distressed Bees, possibly combined with odours or other signals from the predator. Heiduk et al. reasoned that if the flowers of Ceropegia sandersonii do rely on mimicking the Flies food source as a way of attracting pollinators, then is should be possible to identify compounds or combinations of compounds produced by these flowers but not usually by other Flowering Plants, and that these compounds should be the same as, or very similar too, compounds produced by Honeybees when attacked by predators.

Analysis of scent compounds produced by Ceropegia sandersonii did indeed reveal the presence of a large number of highly unusual (for a flower) substances, 60% of which, including all of the main compounds, were found to be produced by both European and African Honeybees under attack. Notably 2-heptanone, an anaesthetic compound released from the salivary glands of Bees which is their main defence against Arthropods to small to sting, several alcohols and acetate esters released from the glands during defensive bites or when a Honeybee extrudes its stinger for defense, and geraniol, geranial, and neral, pheromones released from the Nasonov gland, which is associated with communication between worker Bees. The use of compounds released from the Nasonov gland as part of a defensive strategy in Honeybees has not previously been suggested, however secretions from this gland are known to be associated with colony defence in other Bee species, so such a mechanism would not be surprising. 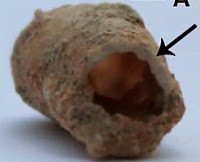 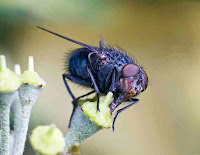 Detecting the presence of Mammal species with Carrion Fly derived DNA.                        The Earth has suffered a decline in biodiversity over the past century unprecedented in human history. This has led to a concerted effort to monitor populations of animals in many of the world’s threatened ecosystems. However such efforts are require considerable...
Follow Sciency Thoughts on Facebook.