Selenium, arsenic and molybdenum in the Bowland Shale and related deposits in England, Wales and Ireland.

The Bowland Shale and other Carboniferous shale deposits in England, Wales and Ireland have received considerable interest from hydrocarbons exploration companies in recent years, due to the high levels of natural gas held within the deposits, which companies hope to exploit using hydraulic fracturing (fracking) a controversial technology which involves blasting the rock with high pressure water, chemicals and sand in order to fracture the rock and release the gas trapped within it. This technology has driven a boom in the gas industry in the US, but has been linked to a number of environmental problems, including the release of harmful trace elements such as arsenic and selenium from the shale deposits, which have in some cases then entered aquifers or other natural water sources. The organic geochemistry and radionuclide flux of the Bowland Shale have been studied, but to date no study has been made of the trace element geochemistry of these deposits, despite the fact that permits to exploit the gas have been issued, and a moratorium on the practice in one English county (Lancashire) has been overturned by the UK Government.

Selenium is essential to animals and plants, but at higher levels becomes toxic. In humans, when consumed at levels higher than about 400 μm per day, selenium is neurotoxin and a carcinogen and can cause diabetes. Excess selenium in the environment has been linked to other fossil fuels, with problems recorded close to coal storage facilities, coal burning industries and oil refineries. In Ireland instances of selenium toxicity in farm animals have occurred where soils directly overlying black shale deposits have had raised levels of the metal due to leaching, and wells in parts of France have been abandoned after it was revealed that the water was enriched with selenium after coming into contact with black shale deposits. Further more hydraulic fracturing of the Barnett Shale in Texas has been directly linked to raised levels of selenium in local groundwater. Incidents of raised selenium in groundwater after hydraulic fracturing have also been reported in parts of Montana and the American southeast.

Arsenic is a more familiar toxin, and is found in many minerals, particularly sulphur compounds. Trace levels of arsenic are again important to animal life, but at higher levels it is extremely toxic, and is a major source of groundwater toxicity in many parts of the world. Raised arsenic levels in groundwater extracted from wells in Texas has also been reported following hydraulic fracturing of the Barnett Shale.

Molybdenum is another metalic element found in a range of minerals. It is essential to the metabolic processes of nitrogen-fixing Bacteria and essential to all multi-cellular life-forms at low levels, but again becomes toxic at higher levels. As with selenium, incidents of molybdenum toxicity have been recorded in Irish livestock grazing on soils directly overlying black shale deposits.

Parnell et al. examined 42 samples of shale taken from the Bowland and related shale deposits at seventeen sites, seven in England, one in Wales, one on the Isle of Man, and eight in Ireland. These were milled and treated with perchloric, nitric, hydrofluoric and hydrochloric acids to remove as much water from the samples as possible, then analysed by inductively coupled plasma-mass spectrometry to determine the trace element levels. 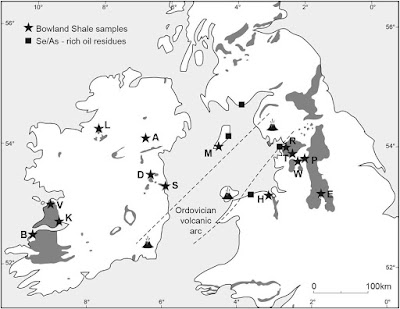 
Arsenic levels were also consistently higher in the British and Irish shales than in other shales studied, reaching a maximum of 52 parts per million in samples from Lancashire, with almost all samples exceeding the 8-9 parts per million typical of the Barnett Shale, hydraulic fracturing of which has again been linked to dangerously high arsenic levels in groundwater.


Parnell et al. strongly suspect that the high levels of selenium, molybdenum and arsenic in the Carboniferous black shales of Great Britain and Ireland are related to the Ordovician volcanic arc which cuts through the centre of the deposits and which would have been an important source of water run-off when the deposits were forming. Layers of tuff (volcanic ash) within the shale beds also suggest that the deposits may also have been subject to occasional bouts of fresh volcanic input as they were forming. Volcanic rocks and ash falls are known to be important sources of trace metals.


The presence of high levels of these elements in the Carboniferous shales of Britain and Ireland is of great concern if plans to exploit these shales go ahead, particularly as the elements are present at much higher levels than they are in American deposits where these elements have caused environmental problems. In theory a repeat of any such problems could be avoided with a sufficiently tight regulatory and monitoring system, but, particularly in the UK, it is unclear if the political will to implement this exists.

The British Geological Survey reports on Shale Gasses in the Bowland-Hodder Unit. Shale gasses have become an economically important source of hydrocarbons in the early twenty-first century, as other reserves have run low...

Report recommends Fracking should be allowed to continue in the UK.              Fracking, or Hydraulic Fracturing, is a process by which water, sand and chemicals are forced into buried sediments in order to shock them into...