Evidence of heat-treatment during the manufacture of silcrete artefacts at Klipdrift Shelter 64 600 years ago.

Heat-treatment can significantly change the physical properties of a number of types of rock, enabling the manufacture of stone tools of a higher quality than would otherwise be possible from the same material. The discovery of this by early humans is considered a significant cultural breakthrough for stone age societies, representing one of the first known instances of the intentional transformation of materials for technological reasons in the archaeological record. This breakthrough appears to have been made independently on a number of occasions around the world in the Late Pleistocene and Early Holocene, with the earliest known occurrences being at Pinnacle Point and Blombos Cave in South Africa, where the technology first appears about 70 000 years ago. In Southern Africa this technology is associated with the advanced Middle Stone Age Still Bay and Howiesons Poort cultures, both of which are known to have made extensive use of fire, which flourished 71 900-70 000 years ago (Still Bay Culture) and between about 65 800 and 59 500 years ago (Howiesons Poort Culture) respectively, then apparently disappeared and were replaced by less advanced cultures. However while individual stone tools with signs of heat-treatment have been identified, establishing how widespread and systematic this approach to tool-making was is much harder, leaving open the possibility that some heat-treated tools may have been made opportunistically from stones that had not been heated with the specific intention of later making tools.

In a paper published in the journal PLoS One on 19 October 2016, a team of scientists led by Anne Delagnes of the University of Bordeaux and the School of Geography, Archaeology and Environmental Studies and Evolutionary Studies Institute at the University of the Witwatersrand, attempt to address this problem by analysing tools from the 64 600-year-old PDB layer at the Klipdrift Shelter palaeoarchaeological site on the Indian Ocean shoreline in the De Hoop Nature Reserve in the southern Cape region.

The Klipdrift Shelter has produced a series of layers about 120 cm thick, containing well preserved archaeological assemblages, including marine and terrestrial faunal remains, organic materials, lithics (stone tools), ochre and engraved ostrich eggshells, dating from about 70 000 to about 50 000 years ago. The layer PDB layer has been dated to 64 600 years ago (plus or minus 4200 years) and is noted for a particularly rich lithic assemblage, with about 2500 stone tools recovered from an exposed surface of about four square meters. These artefacts are considered to be of the intermediate Howiesons Poort technology phase, with a large number of notched tools and a predominance of silcrete items. Of the knapped tools from this layer 46% were found to be made of silcrete, 35.4% of quartzite, 17.1% of hydrothermal quartze and 1.5% of chert or calcrete. 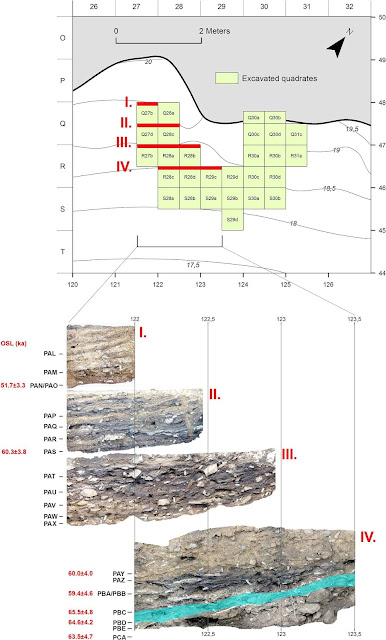 Map of the excavated area at KDS and site stratigraphy with OSL dates. Magnus Haaland in Delagnes et al. (2016).
Heat-treated can be used to modify a variety of rocks for making stone tools, most notably flint (chert) and silcrete. However the temperatures needed for heat-treatment of flint are far higher than those needed for heat-treatment of flint, and only heat-treated silcrete tools have been found at Pleistocene South African Sites. Silcrete is a highly variable rock, and the effects of heat-treatment upon it are also variable, which makes it difficult to simply pick up a piece of silcrete and say 'this has been heat-treated'. Typically when heat-treated silcrete becomes more brittle, loses porosity, is reddened and may fracture. However without knowing the original properties of a piece of silcrete it is difficult to assess whether it has been heat-treated.

Silcrete is not naturally occurring at the Klipdrift Shelter, rather it outcrops at a number of sites in the Cape Fold Mountains about 10 km to the north of the site. In order to assess whether the silcrete tools of layer PDB had been treated with fire, Delagnes et al. collected a series of comparison samples from these sites. These samples were not thought to necessarily match the outcrops which produced the material for the stone tool production, but were chosen for similarities in lithological properties (grain size, mineral composition etc.). 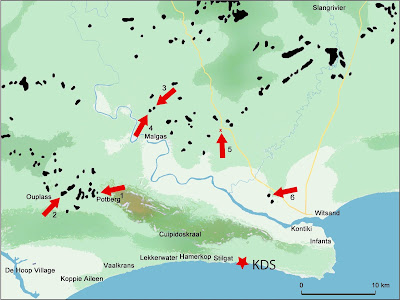 By comparing silcrete artefacts from layer PDB to both heat-treated and non heat-treated samples from this reference collection, Delagnes et al. were able to ascertain that 92% of these objects showed signs of heat-treatment prior to manufacture, while of the remaining items the majority were impossible to assess (primarily due to exposure to fire after their manufacture, probably as a result of being discarded in places where fires were subsequently built), while only 1.5% of the items were identified as having been manufactured without the use of fire. 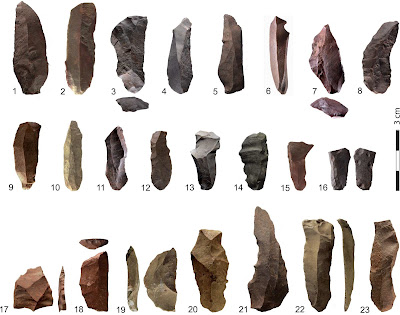 However, simple heat-treatment prior to production does not appear to have been the entire story of the manufacture of stone tools at Klipdrift Shelter. Around 25% of the tools show signs of having been worked both before and after heating, suggesting that the heat-treatment was part of an extended manufacturing process rather than a simple pre-treament. Furthermore about 7% of the items show signs of heat-induced fracturing, which does not appear to have been a catastrophe to the tool-makers, since they were able to work these incidental surfaces into their eventual design rather than being forced to abandon the objects. 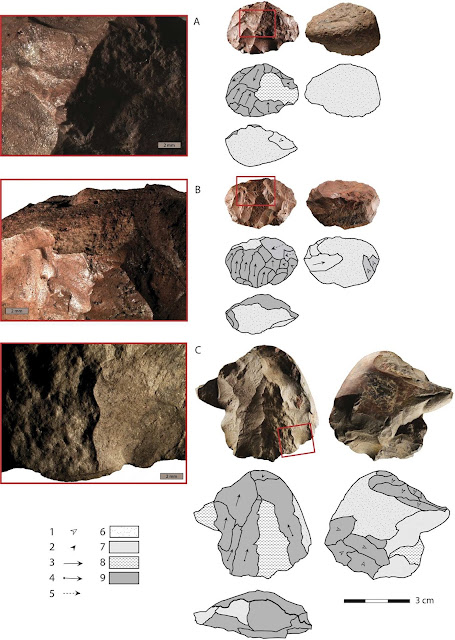 Heated blade cores from layer PBD, Klipdrift Shelter. Caption for drawings: (1) Knapping platform preparation, (2) convexity preparation, (3) blade removal without initiation, (4) blade removal with initiation, (5) indeterminate removal, (6) cortex, (7) preheating surface, (8) heat-induced non-conchoidal fracture (HINC), (9) post-heating removal. Note that all three cores (A, B, C) show a sequence of core exploitation (preparation and blade production) that follows a heat treatment which has resulted for A and C in heat-induced fractures, and which was preceded for A and B by a first stage of core exploitation. Delagnes et al. (2016).

Delagnes et al. further reason that it is likely that a higher proportion of blocks underwent heat-induced fracturing during preparation, as in many cases reworking may have subsequently removed all traces of the heat fractured surface. With this in mind they reason that the deliberate heat-fracturing of material may even have been part of the manufacturing process. Such fractures tend to occur along plains where there are pre-existing (but invisible) weaknesses in the rock, such as those caused by iron oxide or hydroxide concentrations (which produce water vapour when heated, fracturing the rock), preventing wastage and accidents later in the manufacturing process. Such deliberate heat-fracturing of rocks has been recorded among modern stone tool-makers in North America, the Andaman Islands and Zimbabwe, and is believed to have been used by the tool-makers of the Sauveterrian culture of the French Mesolithic (8500-7500 years ago). 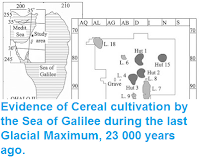 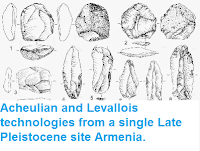 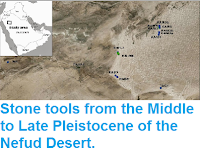