An Ophthalmosaurid Ichthyosaur from the Late Jurassic of Gujarat State, India.

Ichthyosaurs were Marine Reptiles known from the Triassic to the Cretaceous. They were fully-aquatic with a Dolphin-like form, and known to have given birth to live young, rather than emerging from the water to lay eggs, as is the case in Turtles and Crocodiles. The group suffered heavily in the End Triassic Extinction, but subsequently recovered their numbers, though not their diversity, with all Middle-Lat Jurassic and Cretaceous Ichthyosaurs known having belonged to a single family, the Ophthalmosauridae, with the exception of a single specimen from the Early Cretaceous of Iraq. However the known diversity of the group is prbably somewhat skewed by the fact that overwhelming majority of known Ichthyosaurs come England, with the majority of the remaining specimens coming from Europe, North America and Russia. Very few Icthyosaurs are known from Gondwana, with only three Jurassic specimens described to date, all from Argentina.

In a paper published in the journal PLoS One on 25 October 2017, Guntupalli Prasad of the Department of Geology at the University of Delhi, Dhirendra Pandey of the Earth and Planetary Sciences Group at Manipal University, Matthias Alberti of the Institut für Geowissenschaften at Christian-Albrechts-Universität zu Kiel, Franz Fürsich of the GeoZentrum Nordbayern at Friedrich-Alexander-Universität Erlangen-Nürnberg, and Mahesh Thakkar and Gaurav Chauhan of the Department of Earth and Environmental Science at KSKV Kachchh University, describe an  Ophthalmosaurid Ichthyosaur from the Late Jurassic Katrol Formation of Kachchh District in Gujarat State, India.

The specimen described comprises a premaxilla, some articulated vertebrae, a left forefin, three isolated phalanges, two mandibular fragments, some ribs, and an associated right forefin, which is probably but not certainly, from the same animal. Because of this partial and fragmentary nature it is not assigned to a specific species or genus. 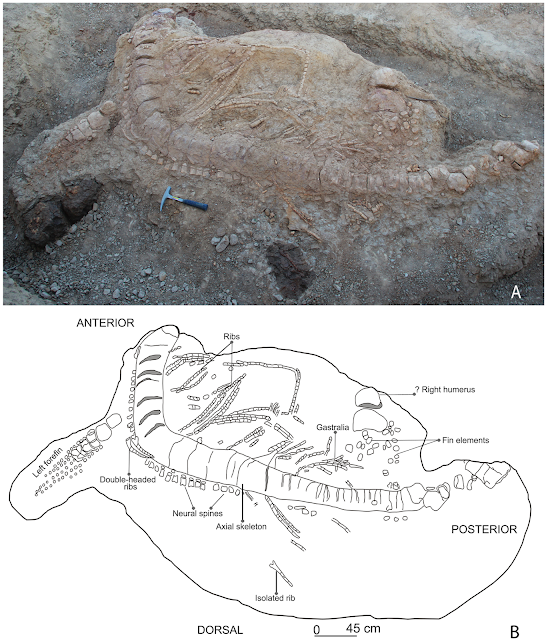 Field photograph (A) accompanied with a sketch (B) of the excavated ichthyosaur skeleton in the Katrol Formation near Lodai village, Kachchh, India. Prasad et al. (2017). 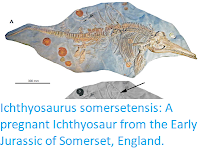 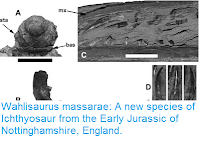 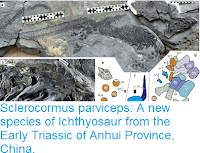 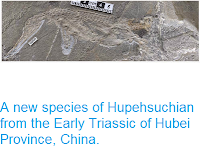 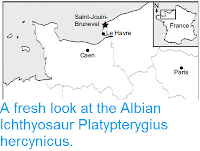