A German tourist has been killed and a local guide injured in a shooting incident on Erte Ale volcano in northeastern Ethiopia on Sunday 3 December 2017. The incident was originally thought to have been carried out by a local militant group, the Afar Revolutionary Democratic Front, who attacked a group of tourists on the volcano in 2012, killing five and abducting several more, but is now thought to have been a tragic accident. The tourist apparently became separated from his group during a walking trip earlier in the day, and was later found by the guide, who had remained on the mountain to search for him after the rest of the party had returned to camp. The two then attempted to make their way off the mountain, but encountered a group of armed guards, sent to the area to protect tourists following the 2012 incident, whom they surprised, approaching them from an unexpected direction and causing them to open fire.

The approximate location of the Erte Ale volcano. Google Maps.

The deserts of Northern Ethiopia and Southern Eritrea are extremely volcanically active, with dozens of volcanoes fed by an emerging divergent margin along the East African Rift; Erta Ale is on the Ethiopian Rift, the boundary between the Nubian Plate and the Danakil Microplate. The African Plate is slowly splitting apart along the Ethiopian Rift and the East African Rift to the south (which is splitting the Nubian Plate to the West from the Somali Plate to the East). Arabia was a part of Africa till about thirty million years ago, when it was split away by the opening of the Red Sea Rift (part of the same rift system), and in time the Ethiopian and East African Rifts are likely to split Africa into a number of new landmasses. 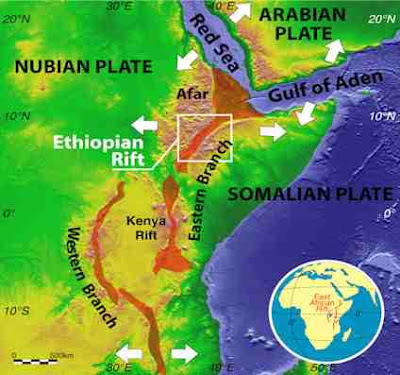 Rifting in East Africa. The Danakil Microplate is the red triangle to the east of the Afar depression at the southern end of the Red Sea. Università degli Studi di Firenze.


The area is also extremely poor, and politically unstable. Eritrea was a part of Ethiopia until 1993, and fought a long and bloody war for its independence. Since Eritrean independence the two countries have not got on well, and have come into conflict on a number of occasions. An attempt by the United Nations to patrol the border was abandoned some years ago. The border region is home to Eritrean backed rebels against the Ethiopian Government, Ethiopian backed rebels against the Eritrean Government and bandits of little political inclination. The Ethiopian Government has blamed Eritrean backed rebels for the incident, but it is unclear if this claim is backed by any evidence; the Eritrean Government denies this and accuses the Ethiopians of 'fabricating lies' to tarnish Eritrea's reputation.

Western tourists are an attractive target to bandits in impoverished areas such as the Danakil, since they are wealthy by local standards, and are seldom well armed. This makes them easy to rob, and in extreme cases, worth holding for ransom. In addition, where tourists make an important contribution to the local economy the tourist industry, then rebel groups may choose to attack tourists to damage the economy. East and North Africa have seen a number of attacks on tourists in recent decades, at least some of which have clearly been intended specifically to harm the tourist industry. 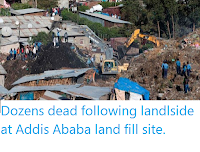 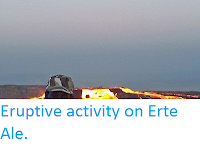 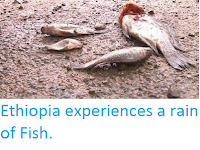 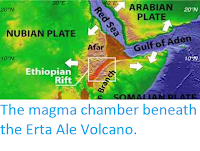