The Sterkfontein Caves site, part of the wider ‘Cradle of Humankind’ complex in Gauteng State, South Africa, has yielded the largest known collection of specimens assigned to the Plio-Pleistocene Hominin species Australopithecus africanus. The site comprises a series of karstic caves (i.e. caves created by the action of water percolating through soft limestone) that would have been encountered by the Hominins both as cave openings at the surface that could provide potential shelter and as potholes into which they could fall. Specimen StW 352 is an isolated calcaneus (heel bone) from Sterkfontain, which has been dated to about 2.0-2.6 million years ago and attributed to Australopithecus africanus. This specimen shows an unusually large peroneal trochlea, the attachment for two of the main tendons in the foot, which in Apes is associated with arboreal behaviour, giving the foot the ability to grip branches. This has been taken as evidence that Australopithecus africanus may have been an arboreal (tree dwelling) species rather than a plains dweller as is usually envisaged.

In a paper published in the South African Journal of Science on 29 November 2017, Ellison McNutt of the Department of Anthropology and Ecology, Evolution, Ecosystems and Society at Dartmouth College, Alexander Claxton of the Department of Anthropology at Boston University, and Kristian Carlson of the Department of Integrative Anatomical Sciences at the University of Southern California, and the Evolutionary Studies Institute at the University of the Witwatersrand, re-examine the peroneal trochlea of StW 352, by comparing it to the same structure in Modern Humans and Chimpanzees, and subjecting the specimen and representative samples of its modern relatives to CT scanning. 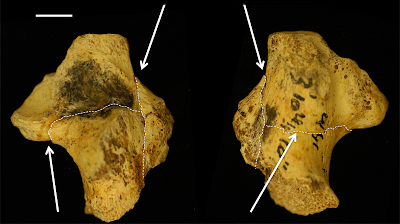 (Left) Dorsal and (right) plantar views of StW 352. Arrows and dashed lines highlight repaired breaks through the body of the calcaneus and separating the peroneal trochlea from the rest of the calcaneus. Note the lack of continuation of the ‘horizontal’ break through its intersection with the ‘vertical’ break in the illustration. McNutt et al. (2017).

Based upon this re-examination, McNutt et al. conclude that the apparently large peroneal trochlea of StW 352 is in fact the result of taphonomic alteration. The projection appears to have been broken off post mortem, and is attached in a more proximodistal position than was originally the case, being attached by what appears to be cortical bone on the the dorsal and distal sides, with a partial void between it and the main body of the bone in other places. 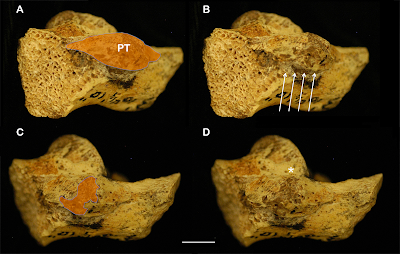 (A) and (B) Proximolateral views of StW 352. (A) Image highlighting the location of the peroneal trochlea (PT). (B) Arrows indicate the presence of a gap between the PT and the body of the calcaneus, which suggests that the true position of the PT should be more proximal and plantar than the current reconstructed position. (C) and (D) Lateral views of StW 352. (C) Highlighted outline of matrix infill. Notice how the proximal edge (to the left) may align fairly well with the dorsal edge (to the right), suggesting that these edges may refit if the intervening matrix was removed. (D) Unobstructed view of the splitting and expansion (underneath the star) of the middle of the PT caused by matrix. McNutt et al. (2017).

Further examination of the specimen revealed that this gap appears to be infilled with alien material, which has apparently served to both alter the shape and enlarge the projection, making it seem considerably more prominent that is likely to have originally been the case. 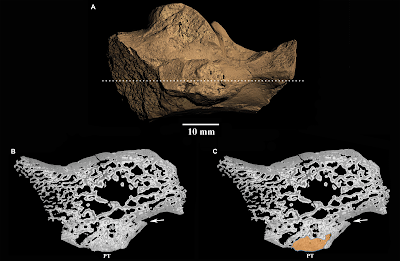 (A) Lateral view of StW 352 with the dotted line indicating the location of the transverse section through the middle of the peroneal trochlea (PT). (B) MicroCT image showing internal structure of the PT. Arrow indicates the area in which evidence of misalignment is best visualised. Note the presence of matrix infill located above the ‘PT’ label. (C) Repeat of image (B) with the shaded area demarking the approximate extent of the matrix infill. McNutt et al. (2017).

Based upon this analysis McNutt et al. conclude that  no evidence of arboreal behaviour in Australopithecus africanus can be derived from StW 352, and the specimen is too distorted for any conclusions about the behaviour of the species to be derived from it.
Posted by Joe Bauwens at 20:35