In 1878 Oramel and Ira Lucas of Garden Park, Colorado, excavated a gigantic neural spine (projection on the top of a vertebra) from the Cope’s Nipple location of the Late Jurassic Morrison Formation, and shipped it to Edward Drinker Cope at the Academy of Natural Sciences of Philadelphia. Cope carefully examined, measured and illustrated this specimen, concluding that it came from a Diplodocid Sauropod Dinosaur, and reconstructed it as having come from a Vertebra over six feet (220 cm) high, which he named Amphicoelis fragillimus. Sadly, the specimen was lost some time between this description being made and Cope’s collection being curated at the American Museum of Natural History after his death, leaving modern scientists only Cope’s illustrations to go on. This is unfortunate, since it has been estimated that if the measurements of the specimen are correct, and it did come from a Diplodocid, then the animal that produced it would have been 58 m in length, by far the largest Dinosaur known, and dwarfing even modern Baleen Whales, which has led to some scientists making the opposite conclusion, that Cope’s measurements were inaccurate or even wildly exaggerated.

In a paper published in the journal Geology of the Intermountain West on 19 October 2018, Kenneth Carpenter of the Prehistoric Museum at Utah State University Eastern, and the University of Colorado Museum of Natural History re-examines Cope’s illustrations of the giant neural spine, and draws new conclusions about the affinities of the specimen, and the nature of the animal that produced it. 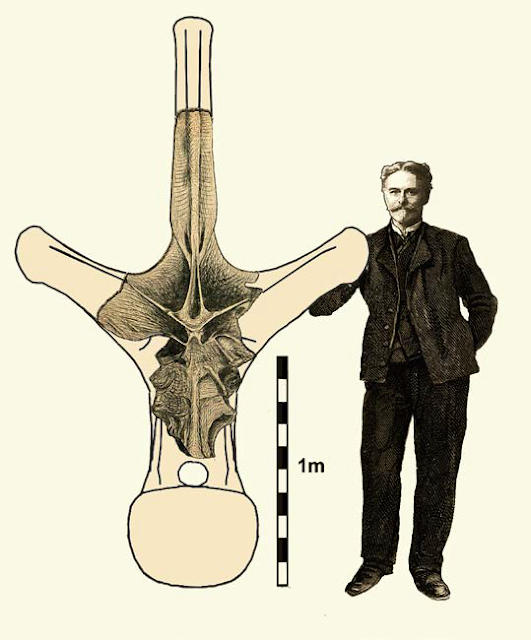 The controversial vertebra and Edward D. Cope who described the specimen in 1878. Carpenter 2018.

When Cope was examining the specimen, very few Sauropods were known, and less than a year had passed since the first description of a North American species. This meant that there were very few Sauropod specimens to compare the neural spine to. Of the available specimens, one struck Cope as being particularly likely, Amphicoelias altus, one of the first described Diplodocids (though this term was not coined until the 1920s), with the similarity apparently so great that Cope described the specimen as a new species within the same genus, Amphicoelias fragillimus. 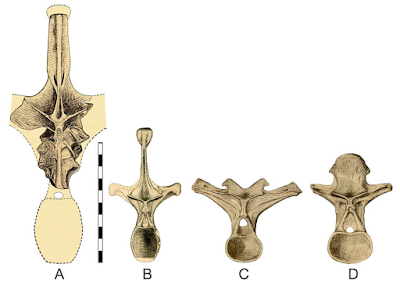 Illustrations of different sauropod dorsals made by Cope to show why he thought that the neural spine of "Amphicoelias" fragillimus (A) was most similar to that of Amphicoelias altus (B) than to Camarasaurus supremus (C) mid-dorsal and (D) more posterior mid-dorsal. Scale bar is 1 m. Carpenter 2018.

Diplodocids were large animals, among the largest Sauropods and therefore Dinosaurs of any kind, but their vertebrae had relatively small centra (disks) with a large neural spine located above. Interpreted as the neural spine of a Diplodocid, Cope's specimen calculated to have come from a vertebra six foot four inches (1.93 m) high, which in turn has been used to suggest an animal 58 m in length.

This is excepionally large, even for a Sauropod Dinosaur, and has provoked some extreme scepticism among palaeontologists, some of whom have gone as far as to sugest that Cope's measurements were inaccurate. Carpenter, however, notes that Cope's measurements and illustrations were generally considered to be excellent, and that, where they can be checked against still extant specimens, appear to be highly reliable. Instead he puts forward an alternative theory, that Cope's specimen comes not from a Diplodocid, but instead from a Rebbachisaurid, a group of Dinosaurs entirely unknown in Cope's day, and which had rather different proportions. To this end he proposes that the name Amphicoelias fragillimus is wrong for the neural arch, since Amphicoelias refers to a genus of Diplodocid Dinosaurs, which was described prior to the specimen, and therefore suggests a new genus name, Maraapunisaurus, meaning 'Huge Reptile'. 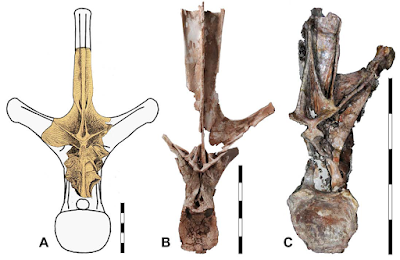 Comparison of the neural spine of Maraapunisaurus fargillimus restored as a Rebbachisaurid (A), and the dorsal vertebrae of Rebbachisaurus garasbae (B), and Histriasaurus boscarollii (C). Increments on scale bars are 10 cm. Carpenter 2018.

Like Diplodocids, Rebbachisaurids were big animals, but their proportions were somewhat different, with their vertebrae typically composing a large, wide centra surmounted by a large neural arch, with the whole structure being far larger compared to the overall size of the animal; interpreted as a neural arch from a Rebbachisaurid, Carpenter estimates that Cope's specimen would have come from a vertebra 2.4 m in height, but that this would have come from an animal only 30.3 m in length (big, but not absurd - and it has never been doubted that the vertebra came from a big animal).

Body comparisons of Maraapunisaurus as a 30.3-m-long Rebbachisaurid (green) compared with previous version as a 58-m-long Diplodocid (black). Lines within the silhouettes approximate the distal end of the diapophyses (i.e., top of the ribcage). Carpenter 2018.

The Rebbachisaurids as a group are currently known only from South America, Africa and Europe, and only from the Cretaceous, which at first sight seems a problem for the assignment of the specimen to this group. However, the Rebbachisaurids are considered to be the sister group to the Diplodocids (hence having neural spines similar enough to be mistaken), and therefore the two groups must have had a common ancestor living in one place, so finding an ancestral Rebbachisaurid living in an area known to have been home to early Diplodocids is not especially surprising, particularly as North America was probably still attached to Europe in the Late Jurassic, and Europe subsequently came into contact with North Africa, while West Africa was still attached to South America, creating a pathway known to have been used by other groups. 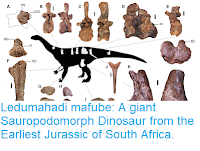 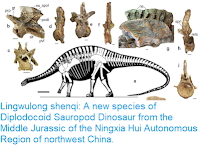 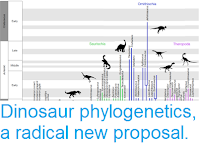 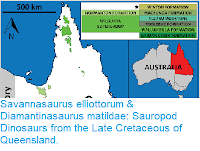 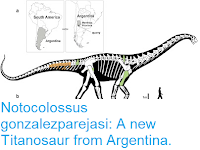 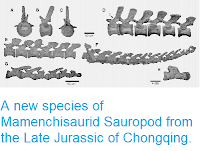