On Thursday 24 May 2012, slightly after 10.45 pm, GMT, the United States Geological Survey recorded an Earthquake on the Mid-Atlantic Ridge, roughly 600 km north of Tromsø, at a depth of 8.8 km, and measuring 6.2 on the Richter Scale. Since this time there have been a number of fairly large aftershocks at roughly the same spot. Although this is a large, shallow Earthquake that could prove very hazardous in other places, the remote location makes it very unlikely that it will have caused any damage or injuries, and quite likely that nobody will have noticed it at all. Such a large Earthquake at this shallow depth has the potential to cause a tsunami, but in this occasion no unusual waves have been observed.

Map showing the location of the quake, and subsequent aftershocks (blue squares; each square represents a different quake, larger squares representing larger quakes). The red line is the Mid-Atlantic Ridge. The black lines on land are national borders. USGS. 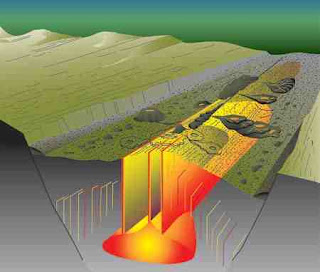 Diagrammatic section through the Mid-Atlantic Ridge. A magma chamber beneath the ridge feeds the volcanoes at the surface via a series of vertical dykes; newer dykes are red-to-orange, older dykes transparent. Volcanoes are fed via lava tubes from the dykes, where the dykes reach the surface there are fissure eruptions. Woods Hole Oceanographic Institution.

See also The magma chamber beneath the Erta Ale Volcano, What happens when a volcano meets a subduction zone? The dangers of a modern Laki style eruption in Iceland, The Hekla Volcano - is the Gateway to Hell about to open? and Earthquakes on Sciency Thoughts YouTube.