Velvet Geckos and Broad-headed Snakes; understanding the population structure of a favored prey item in order to help protect an endangered predator.

Broad-headed Snakes (Hoplocephalus bungaroides) are medium-sized (~60 cm) venomous snakes restricted to the Sydney Basin of New South Wales, Australia. Their numbers have declined greatly in recent years due to habitat loss and illegal collecting for the pet trade. Attempts to help the population of Broad-headed Snakes to recover have concentrated on the creation of artificial habitats to replace lost ones; in this case eroded sandstone outcrops that have been destroyed, sometimes illegally, by human activity. 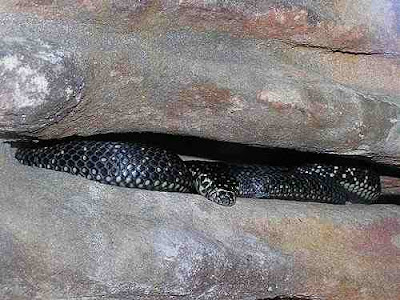 Snakes have been found to be willing to accept artificial rock-sites as suitable environments, and to be able to relocate themselves to new sites within about 10 km of existing colonies. However in order for populations to succeed, the snakes need not just a suitable environment to inhabit, but a source of suitable prey. 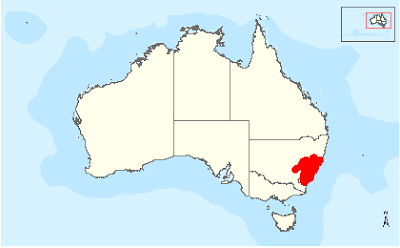 Adult Broad-headed Snakes will happily consume a variety of prey animals, but the main food source for juveniles (~70% of all prey items) is the Velvet Gecko (Oedura lesueurii), which unlike the Snakes does not seem to willingly colonize new sites.

In a paper published in the journal BMC Evolutionary Biology on 14 May 2012, a team of scientists led by Sylvain Dubey of the Department of Ecology and Evolution at the University of Lausanne, detail the results of a study into the population of Velvet Geckos in order to assess how these animals disperse. 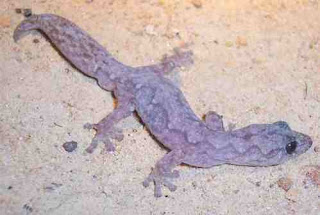 Firstly they tried a capture-tag-release-recapture experiment to find out how far individual Geckos naturally ranged. Despite running these tests for slightly over two and a half years they found that few of the Geckos travelled more than 30 m, and none of them was ever found to have moved more than 1.7 km from where it was originally captured.

Secondly they tried a genetic analysis of the populations of Velvet Geckos to see how much interbreeding was going on. This showed very little interbreeding between populations, with groups of Geckos separated by only a few kilometers apparently having been genetically isolated for millions of years. The Geckos have apparently remained at the colony sites constantly even through changing climate cycles.

This means that the Geckos are highly unlikely to colonize artificial sites on any useful sort of timescale, even it these sites are located on the sites of former colonies, and within easy reach of extant populations. It may still be possible, however, to artificially introduce the Geckos to sites, and establish new breeding colonies artificially.