The formation of a Keplerian Disk in the L1551 NE Protostellar System.

Protostars are areas within molecular clouds where stars are forming, areas of increased density surrounded by dusty envelopes of gas hundreds of AU across (AU stands for Astronomical Unit, 1 AU being the average distance between the Earth and the Sun). As these objects gain mass their gravity increases, causing more material to spiral inwards. This causes the disk of surrounding material to rotate faster and faster. Eventually the inner part of the disk rotates to fast for the outermost parts to keep up, causing this to be lost. The remaining, fast spinning inner disk is called a Keplerian Disk. Most of the material in this will spiral in and add to the mass of the developing star, though some may remain in orbit forming a planetary system.

L1551 is a molecular cloud containing a number of protostellar systems, in the constellation of Taurus, roughly 450 light years from Earth. One of these is the L1551 NE system, a binary system thought to be very young due to its coolness (~91 K, or -182°C) and the high ratio of matter in the surrounding disk compared to that in the two central protostars. In a paper published in the online arXiv database at Cornell University Library on 17 May 2012, a group of scientists led by Shigehisa Takakuwa of the Academia Sinica Institute of Astronomy and Astrophysics in Taiwan discuss the results of a study of the L1551 NE system using the SubMillimeter Array on Mauna Kea, Hawaii. 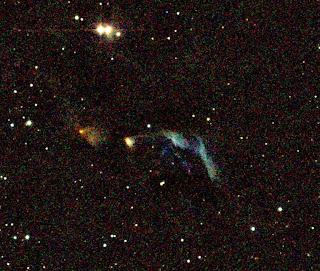 The L1551 molecular cloud (center). L1551 NE is at the top left of the cloud (this is the northeast, east and west are reversed on sky images as they are looking up. Caltech.

Takakuwa et al. imaged the L1551 NE system at 330-335 GHz, enabling them to plot the density of ¹³CO and ¹⁸CO, hopefully proxies for the density of molecular material as a whole. This enabled them to map a Keplerian disk in the system measuring about 300 AU in diameter, and an outer disk measuring about 600 AU. The whole disk system has a mass roughly equivalent to 12% that of our Sun, the inner disk about 0.09%. The two protostars a combined mass equivalent to 80% of the Suns.

Diagram showing the extent of the disc around the two protostars of the L1551 NE system (A & B). Contours reflect density. The arrows the direction of material being ejected by L1551 NE A.

See also Fomalhaut b; not a planet after all? The strange debris disk of 99 Herculis, PSR J1719-1438b. The Diamond Planet, The Protostar HOPS-68 and Stars and Exoplanets on Sciency Thoughts YouTube.