Two new species of True Bug from the Mesozoic of China.

The Hemiptera, or True Bugs, are one of the most numerous and widespread groups of Insects, but there taxonomy is poorly understood. Modern genetic studies have suggested that many long established taxonomic relationships are in fact incorrect, but have not been able to propose alternative models for the taxonomy of the group. An alternative method of determining the relationship between living groups of animals is to study their fossil record, though this can be difficult with Insects, as fossils are often fragmentary, and, until fairly recently, were often overlooked in favor of larger, more spectacular fossils.

To this end a team of scientists led by Yunzhi Yao of the Key Laboratory of Insect Evolution and Environmental Changes at Capital Normal University and the State Key Laboratory of Palaeobiology and Stratigraphy at the Nanjing Institute of Geology and Palaeontology have been collecting fossil Bugs from a number of sites in China noted for their exceptionally preserved Insect faunas. In a paper published in the journal PLoS One on 24 May 2012, they describe two new species of True Bug from the Late Jurassic to Early Cretaceous, Yixian Formation of Liaoning Province, China, and the implications of these new species for the classification of the group.

The first of these new species is Venicoris solaris, the Solar Vein-bug. It is a ~10 mm Bug from Chaomidian Village, near Beipiao City, described from 85 male and 125 female specimens. 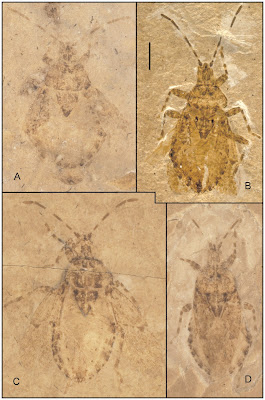 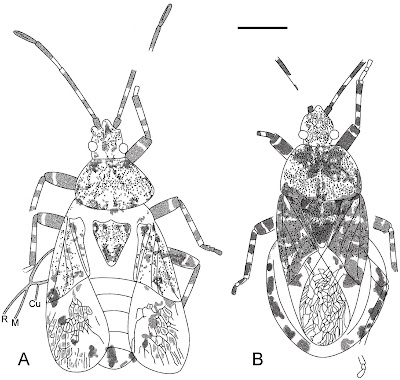 The second species is named as Clavaticoris zhengi, Zheng's Claval Bug, in honor of Dr. Leyi Zheng of the Institute of Entomology at the College of Life Science at Nankai University. It is an 18.5 mm bug from the same locality as Venicoris solaris, named from two female and one male specimens. 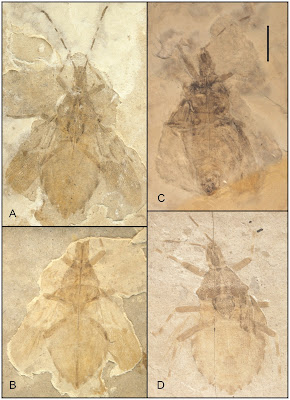 Photographs of Clavaticoris zhengi. (A & B) Female under air; two halves of same specimen, obverse and reverse from rock that has been split. (C) Male under ethanol. (D) Female under air. Scale bar is 4 mm. Yao et al. (2012). 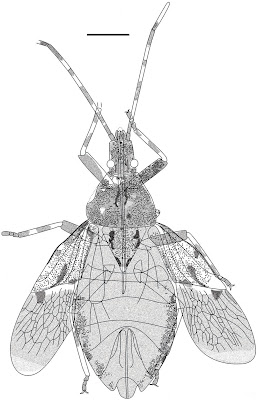 See also New species of Leaf-Mining Moth from northern Chile, An Assassin Bug from the Palaeocene of Spitsbergen Island, A fossil termite from the Late Oligocene of northern Ethiopia, New species of moth from Yunnan Province and New species of Owlfly from Morocco.