Many European organisms have very localised populations, related but distinct species separated by relatively short geographical distances. This has long been assumed to be a result of species being driven into refugia during the Pleistocene glaciation, where they became reproductively isolated due to genetic drift. However recent studies have lent to a better understanding of the genetic structures of such populations, and the likelihood of them becoming reproductively divided during glaciation events, and has led many scientists to conclude that many of these speciation events actually occurred during the Messinian Salinity Crisis, between 5.9 and 5.3 million years ago, when the Mediterranean almost completely dried up and many adjacent areas became uninhabitable due to aridity, forcing species unable to cope with these conditions into refugia further to the north. 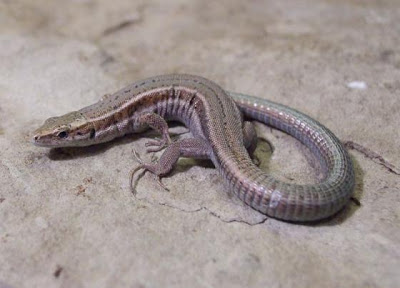 Barata et al.tested both mitochondrial and nuclear DNA from Lizards from eight seperate populations in the High Atlas Mountains of Morocco, each apparently isolated from the others, since the Lizards are restricted to alitudes above 2400 m. Since these Lizards are (unusually for a reptile) restricted to the cooler environments of the mountain tops, they would, in theory, have been able to move downwards during cooler parts of the Pleistocene, allowing interbreeding of the populations if there were not genetically isolated by this time.

The study found that the Lizards were divided intp six genetically distinct lineages, which appeared to have diverged between 7.6 and 2.4 million years ago. Barata et al. did not go as far as to name these lineages as separate species, but did note that Atlantolacerta andreanskyi could better be regarded as a complex of cryptic species. 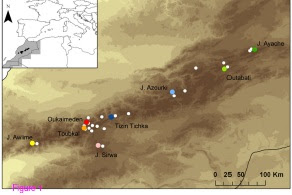 See also A giant Monitor Lizard from the Miocene of Samos, Greece, Velvet Geckos and Broad-headed Snakes; understanding the population structure of a favored prey item in order to help protect an endangered predator, News species of Girdled Lizard from the Democratic Republic of Congo, A new species of Semiaquatic Spectacled Lizard from southern Peru and Reptiles on Sciency Thoughts YouTube.