Sundews (Drosera spp.) are a widespread group of Carnivorous Plants, found on every continent except Antarctica. They are able to live on extremely nutrient poor soils by capturing Insects and other small Arthropods using tentacles on their leaves which excrete glistening glue drops that resemble dew, then digesting them using enzymes excreted from pores on the leaves. Several species exhibit limited movement, with tentacles and sometimes whole leaves bending to enfold struggling prey animals, though the mechanisms behind this are not well understood.

In a paper published in the journal PLoS One on 26 September 2012, a team of scientists led by Simon Poppinga of the Plant Biomechanics Group at the University of Freiburg study the movements of Drosera glanduligera, a common southern Australian Sundew, which catapults prey animals into the central part of its feeding leaves using non-sticky 'snap-tentacles' around the outer part of the leaves, then enfolds them with the shorter glue tentacles. 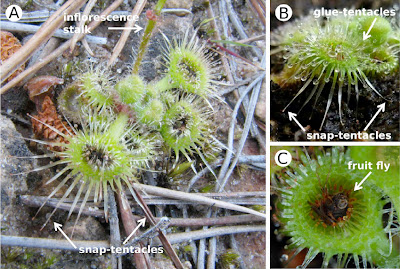 Poppinga et al. found that the tentacles moved by contracting the cells on the inner (adaxial) side of the tentacles, and at the same time expanding those on the outer (abaxial) side, achieving a rapid folding towards the center of the leaf. This was not a repeatable movement, as in the muscle of an animal, or even the closing of the leaf of a Venus Fly Trap (Dionaea muscipula); once a tentacle had contracted once it could not be used again (this is similar to the sudden movements used by some plants to launch seeds). The movement of the tentacles was dependent on a number of environmental factors, with faster movements in warmer conditions. Plants which were too cool or suffering from dehydration do not move very fast. 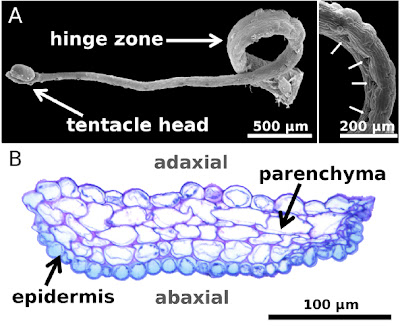 The anatomy of the snap-tentacles. (A) SEM micrographs; left,  entire tentacle; right, detail of the zone where folding occurs, with arrows indicating the cells which compress. (B) Transverse section of the hinge zone. Poppinga et al. (2012). 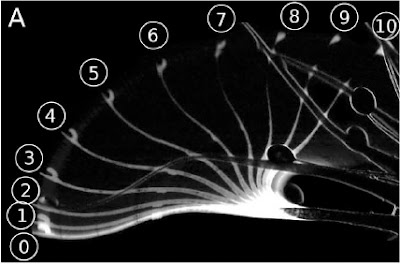 See also Ants in the diet of a Cambodian Pitcher Plant.