How Cow pats help the spread of the Invasive Cane Toad in northern Australia.

The Cane Toad, Rhinella marina, is a large, toxic, Amphibian from Central and South America, introduced to 1935 as a biological control of the Cane Beetle, Dermolepida albohirtum, an agricultural pest. Unfortunately the Toad proved to be rather poor at controlling the Beetles, and very good at consuming a variety of Australian invertebrates, as well as poisoning local predators, which evolved in an environment free of poisonous potential prey items and have been slow adapting to the introduction. Since their introduction the Toads have spread across much of northeast Australia, and caused a great deal of problems for local conservation efforts. 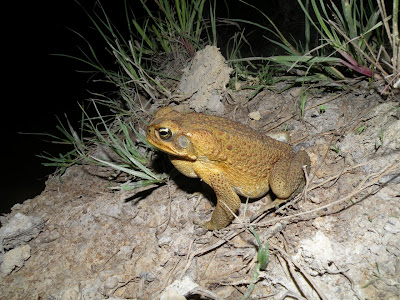 
The spread of the Toads is particularly associated with agricultural land, particularly cattle ranching, which provides year-round irrigation and extended strips of Toad-friendly environment along which to spread. In a paper published in the journal PLoS One on 7 November 2012, Edna González-Bernal, Matthew Greenlees, Gregory Brown and Richard Shine of the School of Biological Sciences at the University of Sydney, discus the results of an investigation into anecdotal evidence that the spread of the Toads is somehow facilitated by the presence of Cow pats (excrement) in the environment.

González-Bernal et al. investigated whether the Toads really did associate with Cow pats, as they were rumored to do, and also whether the Cow pats helped them to retain moisture, to regulate their temperature or to gain access to food.

They found that Toads in an environment with Cow pats would be found on or near to the pats more than would be expected by random chance, but that the Cow pats, despite being warm and wet, made no difference to the body temperature of Toads upon them, and were, if anything, slightly more likely to absorb moisture from the Toads than the other way around.

However the Cow pats did appear to contribute to the Toads feeding strategy, with Toads near to pats able to consume Dung Beetles, another introduced species, which apparently make up a considerable proportion of the Toads diet on land used for pasture. This suggests that the presence of cattle farms does indeed facilitate the spread of the Toads.

See also Three new species of Frog from the Peruvian Andes, The impact of the introduced Common Myna on the Birds of Canberra, Blue Flatworms invade Menorca, New species of Robber Frog from Panama and A cryptic species of Ground Frog from southern Chile.