A Jurassic Turtle bone-bed from the far northwest of China.

Turtles are aquatic reptiles with a shell that encases their body, and into which the head and limbs can be retracted at least partially. They have a fossil record that dates back to the Late Triassic, about 220 million years ago, and they have been an important part of many marine and freshwater ecosystems ever since. Their exact relationship to other reptiles is difficult to determine from morphological evidence since their bodies have become so heavily modified, but genetic studies suggest that they are a sister group to the Archosaurs (Crocodiles, Dinosaurs and Birds).

In a paper published in the journal Naturwissenschaften on 21 October 2012, a team of scientists led by Oliver Wings of the Museum für Naturkunde in Berlin and the Department of Geosciences at Universität Tübingen, describe an extraordinary fossil bone-bed from the Turpan Basin of northern Xinjiang Province in the far northwest of China. 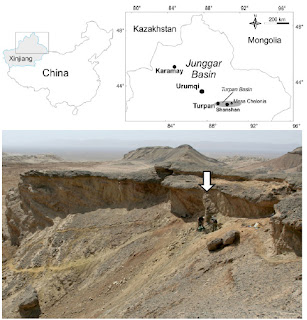 The location of the Turtle bone bed (above) and a photograph of the outcrop (bellow). Wings et al. (2012).

The outcrop is referred to by Wings et al. as 'Messa Chelonia'; it is roughly 25 km east of the city of Shanshan. Fossil turtles were exposed along a 30 m wide outcrop, located by the Sino-German Cooperation Project in 2008. A half meter square block was removed in 2009 and prepared in Shanshan; several more blocks were removed in 2011, but have not yet been worked on.

The deposit is believed to be late Middle Jurassic in age, making it about 165 million years old. All the Turtles present appear to belong to a single species, Annemys sp.. Wings et al. suggest that they died in a mass mortality event around pools in a drying river-bed during a prolonged drought, then were concentrated by a flash flood when the draught broke. 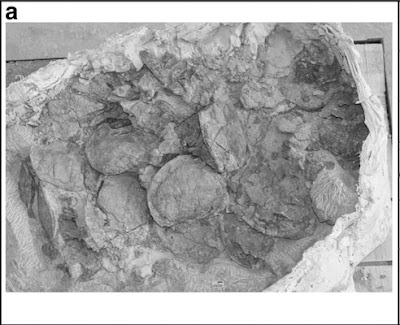 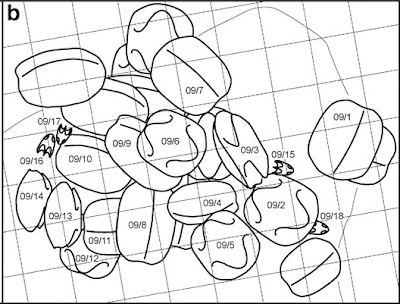 (a) The material recovered from the Mesa Chelonia site in 2009, and partially prepared within its plaster and burlap case. (b) Schematic drawing of the Turtles within the block; some Turtles are shown which have been removed in the photograph. Wings et al. (2012). 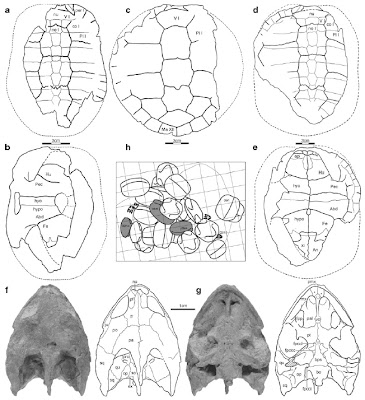 See also The death of Lonesome George and the extinction of the Pinta Island Giant Tortoise, An Eucryptodiran Turtle from the Early Cretaceous of Spain, A new species of Giant Side-Necked Turtle from the Palaeocene of Columbia and Reptiles on Sciency Thoughts YouTube.