Two new species of Ground Beetle from the Pyrenees.

Ground Beetles (Carabidae) are large carnivorous Beetles with destictive black or metalic elytra (wing-cases) that are sometimes fused, preventing flying. They have paired glands on their lower abdomens which produce noxious chemicals, used to defend the Beetles against predators (in one group of Carabids, the Bombadier Beetles,these secretions have evolved to react violently, even explosively, to one-another). The group has a fossil record dating back to the Triassic.

In a paper published in the journal ZooKeys on 28 August 2012, Arnaud Faille of the Zoologische Staatssammlung München, Charles Bourdeau of Rebigue in France and Javier Fresneda of the Museu de Ciències Naturals (Zoologia) in Barcelona describe two new species of Carabid Beetles from the Pyranees Mountains, on the border between France and Spain. Both new species are placed in the widespreas Eurasian genus Trechus.

The first new species described is named Trechus bouilloni, named in honour of Michel Bouillon, a caver who discovered Ground Beetle populations in the Pyranees. It is an elongate, round-sided, dark-brown Beetle, roughly 5 mm in length, found living on a scree slope beneath a limstone cliff on the northern slope of the plateau of the Sierra de Andía–Urbasa in the Navarra Region of Spain, on the south side of the Pyranees. 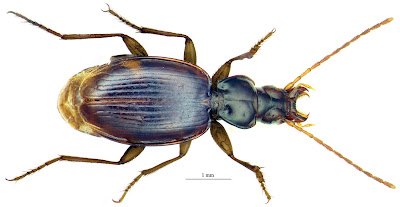 The second new species described is named Trechus bruckoides, which implies a relationship with Trechus brucki, the new Beetle being a cryptic species formerly identified as members of that species, and identified by DNA analysis of museum specimens. Trechus bruckoides is an elongated, round-sided, dark-brown Beetle, similar in appearance to Trechus brucki. The species is known from a single species living in sinkholes on the limestone Esturou Platuae, in the Pyrénées Atlantiques department of France.