Scientific journals are the mainstay of academic communication within the sciences, the place where new ideas are put forward in papers for which the authors, rather than the editors, take responsibility. They are not, on the whole, noted for either competitions or artistic content. All such rules have exceptions however, and this year the editors of the journal BMC Ecology decided to hold an Ecology Image Competition, which would be open only to scientists working in the field, with the aim of determining how the scientists' deeper knowledge would enable them to communicate more about the subject. The results of this experiment were presented in a paper published in the journal on 22 March 2013.

The wining picture in the competition was by Moritz Muschick of the University of Sheffield, and shows a Stick Insect Timema poppensis on a leaf of it's host tree Sequoia sempervirens. The Insect is well camouflaged, demonstrating coevolution between the animal and the plant; it is in the Insect's interest to look as much like the plant as possible, since an Insect that can be seen by predators is likely to be eaten by predators, but against the interest of the plant, which would be better off if the Insect is eaten, since the Insect eats its leaves. It also suggests that the Stick Insects are at significant risk from predators with eyesight not dissimilar to our own. 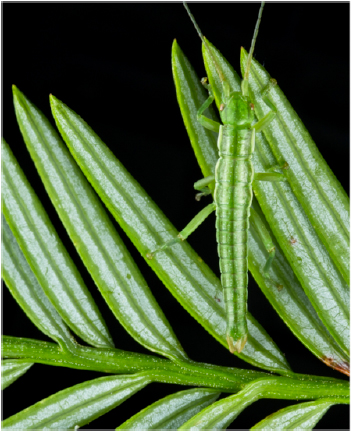 Moritz Muschick's image of a Stick Insect on a Redwood leaf. BMC Ecology (2013).

The runner-up prize went to Benjamin Blonder of the University of Arizona for a picture of a subalpine meadow in Colorado, which shows a variety of plants, implying strong niche partitioning within the meadow. 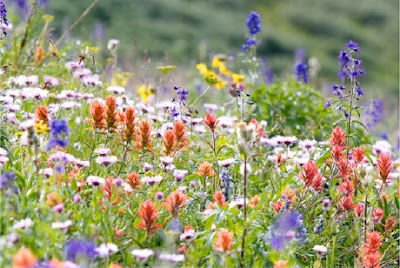 There were also several section prizes awarded, relating to the editorial sections within the journal. The first of these was the Behavioural and Physiological Ecology Section, which was awarded to Laëtitia Kernaléguen of Deakin University for an image of two blood-covered male Southerm Elephant Seals (Mirounga leonina) fighting over a harem of (unseen) females. 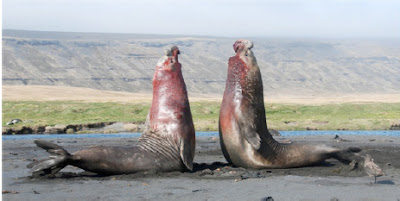 The Community, Population and Macroecology pize was won by Michael Siva-Jothy of the University of Sheffield for an image of a carnivorous Polistine Wasp hovering over a Scarce Swallowtail Butterfly as it fed from a Scabius flower. 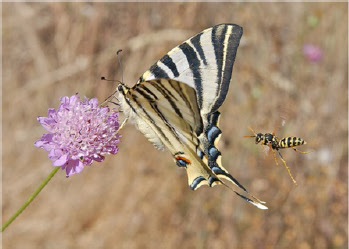 The Conservation Ecology and Biodiversity Research prize went to Hara Woltz of Columbia University for an image of a Galápagos Tortoise (Chelonoidis nigra) on a road on Santa Cruz Island. 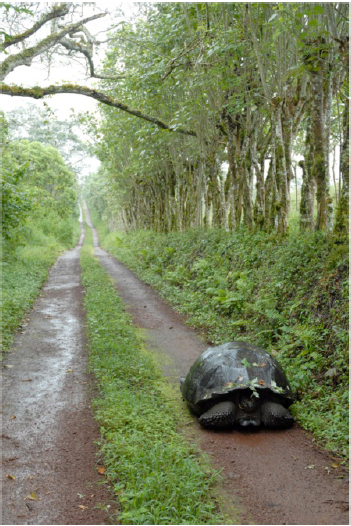 The Landscape Ecology and Ecosystems prize went to Yulin Jia of the U.S. Department of Agriculture's Dale Bumpers National Rice Research Center for an image of ancient rice paddies in Yuanyang, China. 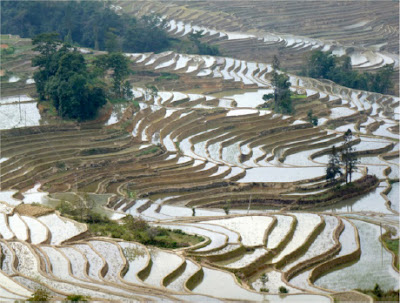 The Theoretical Ecology and Models prize went to the only non-photographic image to win a prize, a graphical representation by Chaitanya Gokhale of the Max Planck Institute for Evolutionary Biology showing an evolutionary game theory model in which multiple players maintain biodiversity. 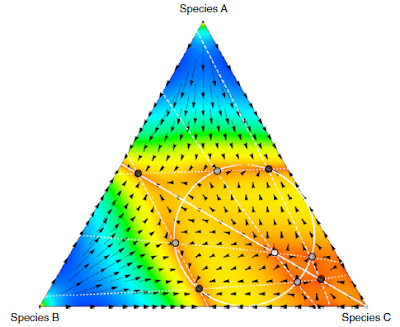 Finally there is an Editor's Pick award for an image showing the work of a field ecologist working in the field. This went to Raf Aerts of the University of Leuven and the University of Utah showing a field notebook in the Peruvian Rainforest. 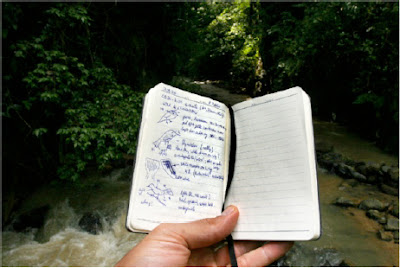 The competition sets out to showcase imagery by ecologists, to show the insights they bring to the subject, and in this it does not seem to have been particularly successful. The photographs are good, but not exceptionally so, and it is doubtful that any insight is present that would be absent in the work of a professional photographer. Documentary photography is a competitive field with few paid positions, and simply taking pictures of pretty animals, plants or buildings is not enough to succeed; rather a great deal of research is undertaken before the camera is even picked up. None of the images in this competition appears to be beyond the scope of such research, and most do not stray far beyond general knowledge (it is doubtful that there are many professional photographers who would be at a loss to explain why Stick Insects are camouflaged). The sole non-photographic image is hard to interpret without reading the paper from which it was taken.

This is not to denigrate the images, nor the knowledge of the scientists who produced them, but the competition seems to have underestimated the skills of professional photographers, who research their subjects thoroughly and can often put more information into an image that an expert on the subject matter with only limited photographic skills. (Disclaimer: my partner is a documentary photographer).