A major spill has been reported in the Nembe Kingdom area of Bayelsa State, Nigeria, with oil covering mangrove swamps, rivers and commercial waterways. The spillage appears to have originated near to the Shell-owned Well 62, early on the morning of Friday 12 April 2013, and has affected members of the Ewelesuo Community, who report they are having difficultly in gaining access to fresh water and that local fisheries have been severely impacted. 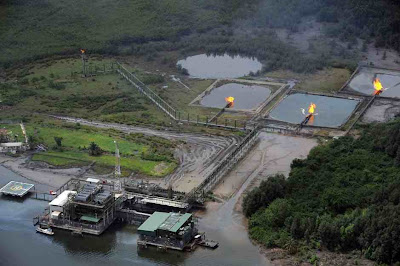 Shell has stopped production on the Nembe Creek this month, while security forces carry out a clamp-down on illegal 'bunkering operations' which siphon oil from pipelines for sale on the black market. Shell claims to lose a considerable proportion of its total production in this way in the Niger Delta , and the activity clearly has an impact on the local environment (though Shell has been accused of using the existence of the oil bunkerers as a way of covering for its own environmental misdemeanors). The oil is siphoned off by cutting into the pipelines, which criss-cross the countryside, then crudely distilling the crude in oil drums to produce a low-quality diesel sold across much of Nigeria.

Security forces have shut down a number of such operations in the area this week, and claim the spill came from a new operation, which had apparently gone wrong, saying they found a small camp with cutting equipment as well as cooking utensils, sleeping mats etc. 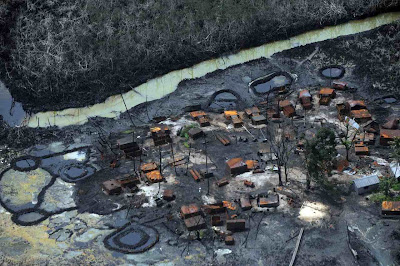 An illegal refinery on Nembe Creek that was raided by authorities on 22 March. Pius Utomi Ekpei/AFP/Getty Images.

Oil bunkering is a highly risky activity, the oil is highly toxic and both cutting into pipelines and the distillation process frequently result in deadly explosions. In addition the authorities are prone to (often draconian) clampdowns on the activities of oil bunkerers, and are threatening to re-introduce the death penalty for those involved in the activity.

However the sale of black-market fuel provides a means of gaining hard cash in an area that has seen little benefit from the presence of the oil companies, and where the oil is often seen as a resource that should belong to the local people, not foreign oil companies or the (fairly remote) government of Nigeria. The environmental problems caused by both legal and illegal oil operations in the Delta strongly impact upon the local economy, which is based upon small scale farming and fishing, leaving many people with no legitimate source of income, which combined with a rapidly growing population and therefore increased demand for food, makes the black market oil industry more attractive than it might otherwise seem. 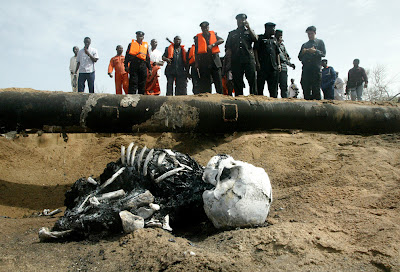 A charred body near to a damaged pipeline that exploded near Ilado Village in Lagos State in May 2006, killing an estimated 200 people. Sunday Alambe/AP.

The clampdown comes following a decision by a court in Holland in January that Shell is responsible for the security of its pipelines in the Niger Delta, and that it can be held responsible for damage to the property of third parties.

The clampdown has not gone unopposed in the area. On Friday 5 April a launch carrying 15 police officers was attacked by unknown gunmen, killing 13. Responsibility for the attack has been claimed by the Movement for the Emancipation of the Niger Delta (MEND), a militant group that has carried out a number of attacks on oil companies and security forces in the Delta region since 2006, though authorities have denied this, blaming the incident on criminals instead. 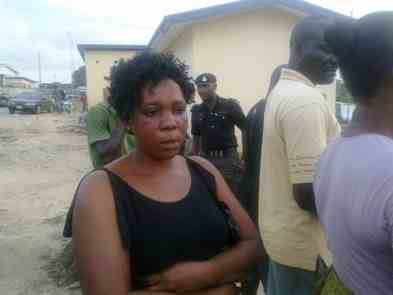 Relatives of the police officers attacked in Bayelsa State waiting for news. Naij.

MEND has also issued a statement to the effect that it has blown up an oil well on Nembe Creek, though both the Nigerian authorities and Shell deny this, as do some former members of the group that have taken part in an amnesty and ceasefire. The statement claims the attacks were in retaliation for the imprisonment of Henry Okah in South Africa, for a bombing in Abuja in 2010. The group has also threatened to attack Muslim targets in Nigeria in retaliation to the activities of the militant Islamic group Boko Haram in the north of the country.

It is unclear to what extent these threats are likely to be followed up. The group has a history of violence, but has in theory been taking part in a ceasefire since 2009, with members receiving government funds as part of the amnesty deal, though there are internal divisions within the organization, and there have apparently been disputes over the distribution of amnesty money. An upsurge in activity combined with an attempt to widen the cause to include religious as well as territorial and economic issues may represent an attempt by one faction within the group to gain control.