Worker killed at Irish lead and zinc mine.

A worker was killed in a partial collapse at the Lisheen Mine in Tipperary, Ireland at about 4.40 pm on  Thursday 4 April 2013. The man has bee named as Mario Francis, a married father of two in is forties, who had worked at the mine for twelve years and came originally from the Philippines. Mr Francis drove a loader at the mine. Attempts to recover his body are ongoing. 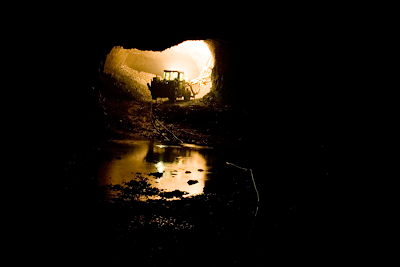 A loader at the Lisheen Mine in County Tipperary. Barry Smith/twelve and a half.


Lisheen is an underground mine, excavating an ore seem 170 m beneath the surface. This is reached via a 1.5 km inclined tunnel. The mine is worked by blasting at the ore-face, then using loaders to move the ore to a crusher, which feeds a conveyer to the surface. This is the mine's second fatality, another man was killed in a similar incident in April 2011.

The Lisheen Mine was operated by Anglo Base Metals, a subsidiary of Anglo American, from its opening in 1997, but was sold to Vedanta Resources in January 2011. There was considerable local opposition to this takeover, due to concerns about the company's environmental and safety record in other parts of the world.

The incident is being investigated by the Irish Health and Safety Authority.