Quisarctus yasumurai: A new species of Tardigrade from a submarine cave in the Okinawa Islands.

Tardigrades, or Water Bears, are minute (generally less than 1 mm and always less than 3 mm) aquatic animals related to Arthropods, Nematodes and Onychophorans. They have segmented roughly cylindrical bodies with four pairs of limbs and a cephalic region (‘head’) undifferentiated from the body. Tardigrades have eutelic development, with all members species having the same pre-set number of cells at maturity, a trait they share with other small animals such as Nematodes. They are noted for their remarkable toughness, able to enter a dormant state in which they can survive freezing, high temperatures, dehydration and even exposure to vacuum, becoming active again when normal conditions return.

In a paper published in the journal Zootaxa on 20 April 2015, Shinta Fujimoto of the Department of Zoology at Kyoto University describes a new species of Tardigrade from the Daidokutsu submarine cave off the southern coast of Iejima, in the Okinawa Islands, part of the Ryukyu Island chain that run between Taiwan and Japan.

The new species is named Quisarctus yasumurai, where ‘Quisarctus’ means ‘What Bear?’ or ‘Who Bear’ indicating the surprise caused when Shinta Fujimoto first saw the species (the suffix ‘-arctus’, meaning ‘Bear’ is commonly applied to Tardigrades, in reference to their common name, ‘Water Bears’), and ‘yasumurai’ honours Koshin Yasumura who collected he specimens from which the species is described. 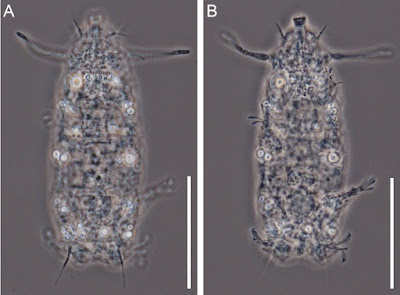 Adult female specimen of Quisarctus yasumurai in (A) dorsal and (B) ventral views. Fujimoto (2015).

The species is described from three specimens, two adult females and a juvenile, collected from sieved calcareous mud from a depth of 29 m. The adult female specimens were 109 μm in length and a cylindrical body with a smooth cuticle. The cephalic region is rounded and lacks lobes. The limbs have sheathed claws without a dorsal spur, the claws of the final pair of limbs being longer than those of the first three pairs. 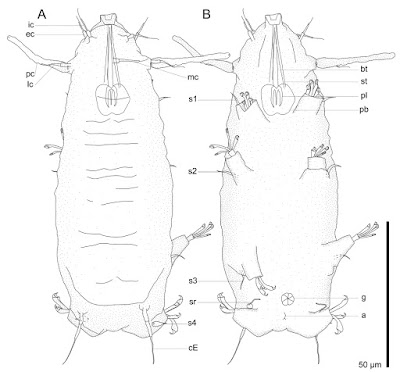 A new species of Tardigrade from Latvia.
Tardigrades are small animals (adult sizes of 0.1-1.5 mm) distantly related to Arthropods and Onychophorans (Velvet Worms). They are plump segmented...