Cryptic diversity: A new species of Wolf from Africa.

Cryptic species are species which closely resemble other species and which can only be separated by careful anatomical examination or even genetic analysis. In recent years the widespread application of DNA analysis to populations of wild animals  has led to the discovery that many well-known species are in fact clusters of cryptic species, with profound implications for the conservation of these species; a single large widespread population suddenly becoming a number of smaller more localized populations.

Golden Jackals, Canis aureus, from North Africa have long been noted for being larger and more robust than Jackals from either Sub-Saharan Africa or Eurasia, leading to speculation that they may represent a separate species or sub-species. A study published in 2011 in the journal PLoS One based upon analysis of mitochondrial DNA found that Jackals from Egypt and Ethiopia were in fact not Jackals at all, but were more closely related to the Grey Wolf, Canis lupus, and suggested that these should be described as a separate subspecies of Wolf, the African Wolf, Canis lupus lupaster. A follow-up study published in the same journal in 2012 found that the mitochondrial lineage ascribed to Canis lupus lupaster was also present in Canids in West Africa, among animals considered to be more typically Jackal-like.

In a paper published in the journal Current Biology on 17 August 2015, a team of biologists led by Klaus-Peter Koepfli of the Smithsonian Conservation Biology Institute and the Theodosius Dobzhansky Center for Genome Bioinformatics at St. Petersburg State University and John Pollinger of the Department of Ecology and Evolutionary Biology at the University of California, Los Angeles publish the results of a much wider study of mitochondrial and nuclear DNA from populations of Golden Jackals from across Southern Europe and the Middle East, as well as Israel, Morocco, Algeria, Mauritania, Senegal and Kenya, and discusses these results and their implications for the classification of African Jackals.

All of the African Jackals were found to be a separate species from the Eurasian Jackals, and more closely related to the Eurasian Grey Wolf. However these African Wolves appear to have separated from their Eurasian cousins over a million years ago, and were judges sufficiently genetically distinct to be placed in a separate species. Examination of taxonomic records for Canids revealed that the French biologist Cuvier had described a ‘Jackal’ from Senegal as a separate species, Canis anthus, in 1820, an analysis that was rejected by subsequent biologists who failed to spot any significant morphological difference between African and Eurasian Jackals. For this reason Koepfli & Pollinger et al. suggest that African Golden Jackals henceforth be referred to as African Golden Wolves, Canis anthus, rejecting Canis lupus lupaster as a valid name. 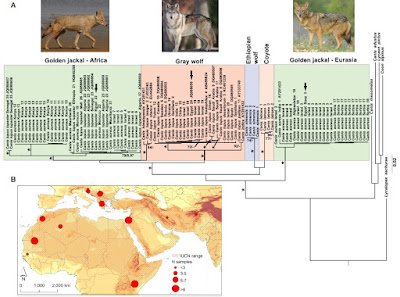 Morphologically the African Golden Wolf and Eurasian Golden Jackal are very hard to tell apart, other than the distinct largeness of the North African specimens; the African Wolf was, on average slightly broader in the snout than the Eurasian Jackal, but not distinctively enough for this to be used as a reliable feature to distinguish the species.

The Golden Jackal samples from Israel were found to be mostly hybrid animals, containing DNA from Eurasian Golden Jackals, Grey Wolves, African Golden Wolves and Dogs. Two Golden Wolves from Egypt were found to have mitochondrial DNA (which is passed through the female line without recombination) from Eurasian Jackals and Grey Wolves, suggesting that hybridization was occurring here too, though whole genome analysis of Egyptian samples was not carried out.

Comparison of the genomes of African Golden Wolves and Dogs suggest that a small amount of Dog DNA derives from African, rather than Grey Wolves; this is roughly comparable to the amount of Neanderthal DNA found in modern Humans, with two groups of Dogs, the Basanji (African Laughing Dog) and Dingo, having higher levels of Golden Wolf DNA than other groups.

This scenario suggests that Africa has repeatedly been invaded by different Canid lineages from Eurasia. Koepfli & Pollinger et al. suggest that this relates to the changeable climate of the Pleistocene Era, with warmer wetter periods when it was possible for Canids to move between Eurasia and Africa, and cooler dryer periods when these populations became reproductively isolated.

Using morphometric analysis to understand the nature of Canid remains from Plio-Pleistocene Hominid sites from East Africa.
Morphometric analysis is a method used by palaeontologists to sort bones and shells into taxonomic and ecological groups. It relies...

A new species of Fox from the Pleisticene of Gauteng Province, South Africa.
Foxes (Vulpini) are a subgroup of the Dog Family, Canidae, found in North America, Eurasia and Africa (South American Foxes are a separate group, more closely related to True Dogs than to other Foxes). The...