Cyclophorid Land Snails are the most abundant group of terrestrial operculate Gastropods (Land Snails having an operculum, a lid which can be used to plug the shell opening) in Africa, Asia and Australia, and comprise 53 of the 234 known Land Snails in Thailand. Members of the genus Pearsonia are distinguished by a flattened, but not quite disk-shaped shell with a distinctive sutural tube that originates from the suture (join between two whorls of the shell) at the last part of the body whorl; they are known from India, Myanmar, South China, Laos and Malaysia, but have not previously been recorded from Thailand.

In a paper published in the Raffles Bulletin of Zoology on 1 July 2015, Sakboworn Tumpeesuwan of the Department of Biology and Palaeontological Research and Education Centre at Mahasarakham University and Chanidaporn Tumpeesuwan, also of the Department of Biology at Mahasarakham University describe a new species of Pearsonia from Lamphun Province in northern Thailand, the first member of the genus found in the country.

The new species is named Pearsonia lamphunensis, meaning ‘from Lamphun’. The species is described from four specimens, with shells measuring from 9 to 10 mm in height and 15 to 17 mm in width. All are dextral (curving to the right) and have 5¼–5½ whorls and a sutural tube which points backwards horizontally. The shells have a zig-zag patternation. 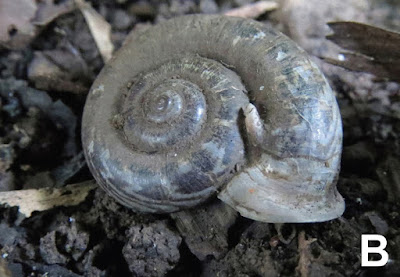 Tryonia infernalis: A new species of Cochliopid Snail from a hot spring in the southern Nevada Desert.
The deserts of southeast California and southwest Nevada have been shown to host a distinctive fauna...

A new subspecies of Polygyrid Snail from West Virginia.

The Appalachian Mountain of eastern North America are considered to be a hotspot for Land Snail biodiversity. There are currently at least ten described species of Polygyrid Snails in the genus Triodopsis in West...

A new species of Dog Whelk from the South and East China Seas.
Dog Whelks, Nassariidae, are burrowing carnivorous Gastropods living in muddy or sandy sediments, from the intertidal zones to...