Evidence of Cereal cultivation by the Sea of Galilee during the last Glacial Maximum, 23 000 years ago.

The domestication of agricultural plants is thought to have begun in the Middle East around the onset of the Holocene, about 11 700 years ago, with agriculture rapidly spreading across Europe, Asia and northern Africa as the practice was either adopted by hunter-gatherer communities or these communities were replaced by peoples who had adopted the new technology. Evidence for such agriculture comes not just from the presence of crops at archaeological sites, but also the presence of agricultural weeds, plants which have evolved to invade cultivated fields but which are not themselves cultivated. However caution needs to be used when relying on this form of evidence, as they are derived from wild plants specializing in the colonizing of disturbed ground, many of which have long histories of close associations with Humans, due to our habit of modifying environments by fire or other methods of clearing.

The Ohalo II site was occupied during the last Glacial Maximum by people interpreted as settled hunter-gatherers. The site comprises six brush huts, and several hearths (fire places) as well as a single grave, of an adult male. The site was inundated by rising waters on the Sea of Galilee shortly after it was abandoned, and remained covered by water until 1989, when it was exposed following several years of heavy water extraction from the lake. The site was excavated between 1989 and 1991 and again between 1998 and 2001. 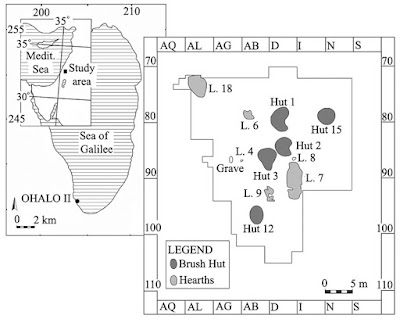 Location map of Ohalo II and central area of excavation at the site. Snir et al. (2015).

Ohalo II has yielded a large number of seeds and fruits (about 150 000 specimens) suggesting the people enjoyed a diet including emmer wheat, barley, peas, lentils, almonds, figs, grapes and olives, similar to that of later agricultural peoples in the Middle East. The site is inferred to have been settled year-round from the presence of remains of migratory Birds which would have been present at different times of year and seeds and fruits from plants which would also have been produced at different times. As well as a wide range of artefacts and food remains, the site also shows evidence of invasion by pest species, including House Mice, Mus musculus, and Black Rats, Rattus rattus.

As well as a wide variety of food seeds, a large number of seeds from weed species were also recovered (15 726 identified specimens, about 10.5% of the total sample). These comprised thirteen different weed species, though the sample was dominated by Corn Cleavers, Galium tricornutum, with the presence of Darnel, Lolium temulentum, also considered to be important. These two plants are particularly significant as they are only known as agricultural weeds growing in cereal fields today, with their original habitat unknown. Four other species present, Chenopodium album, Malva parviflora, Notobasis syriaca and Silybum marianum, are also considered agricultural weeds today, though these species are also sometimes eaten, so caution needs to be used when implying their significance at archaeological sites.

When working with Holocene cereal samples archaeologists typically separate cultivated crops from wild plants by the disarticulation scars on their rachises (expand), with smooth scars being considered ‘wild-type’ and rough scars ‘domestic’; where more than 10% of the sample has domestic rough scars it is thought that the sample is likely to be of agricultural rather than wild origin. The Ohalo II samples of two cereals exceed this limit, with Wild Barley, Hordeum spontaneum, yielding 36% domestic-type scars and Wild Wheat, Triticum dicoccoides, yielding 25% domestic-type scars. 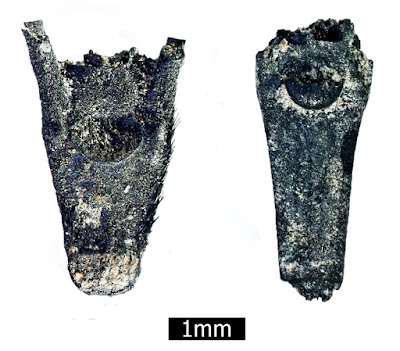 Snir et al. are cautious in their interpretation of these results, noting that the ‘rough’ domestic scar is typically the result of harvesting dry, yellow seeds rather than green or yellow-green seeds, rather than any inherent difference in the plants. Domestic fields of cereals are planted at the same time and mature at the same time, leading to farmers being able to harvest more-or-less entirely yellow seeds. With wild-growing cereals plants at different stages of maturity tend to be present, leading to a mixture of yellow, yellow-green and green seeds being harvested, typically leading to a ‘wild-type’ sample, with a high proportion of smooth scars. However a number of experiments on Wild Barley harvesting at different sites in Israel have shown that a high level of smooth, domestic type, scars can be achieved if the plants are allowed to dry between harvesting and winnowing, suggesting that the Ohalo II sample could be a result of the practices used in food preparation rather than evidence of agriculture. 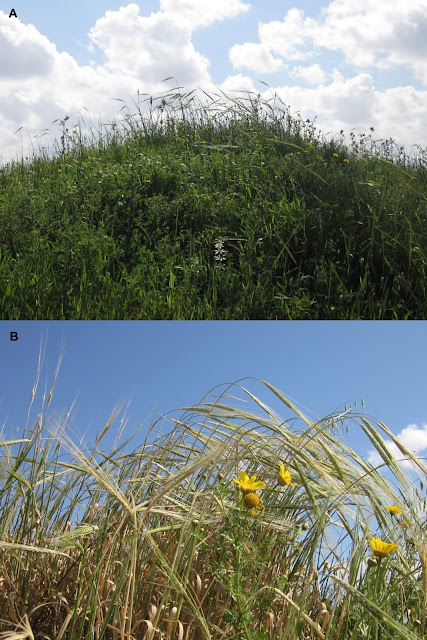 The Ohalo II site has also produced a number of flint sickle-blades with a distinctive glossed surface pattern. This is considered typical of the Early Holocene Natufian culture, found in the Middle East roughly 10 000 years later than the Ohalo II site is thought to have been occupied. Experimental work on harvesting with flint tools has shown that such a smooth surface can be produced by cutting green and yellow-green cereal stems; this lends support to the idea that the Ohallo II inhabitants were harvesting green and yellow-green cereals then allowing them to dry before winnowing, and also suggests that the similarity between Ohalo II and Natufian tools is a product of similar practices rather cultural continuity. 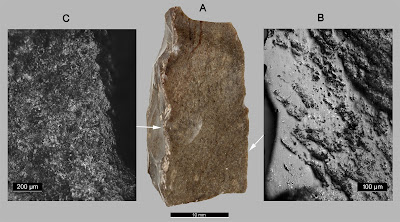 Sickle blade from Ohalo II. (A) Macrograph of the sickle blade. (B) Micrograph showing the use-wear polish produced by cereal harvesting, observed along the sharp edge of the blade (original magnification ´ 200). (C) Micrograph showing hafting wear including streaks of polish associated with rounding observed along the opposite edge (original magnification ´ 100). Snir et al. (2015).

Snir et al. do not suggest that agriculture began at, or close to, Ohalo II 10 000 years earlier than previously realized and subsequently spread across the Middle East, but rather that some experimentation with plants that later became agricultural crops was occurring at this time. They note that this is common in palaeoarchaeological studies, with evidence suggesting that many technologies show a long period of experimentation before they are perfected and become widespread. There is no evidence to suggest that the practices present at Ohalo II led directly to later development of agriculture across the Middle East, but they do indicate that the population, reacted to similar environmental conditions as the later proto-agriculturalists in a similar way, by experimenting with the control and harvesting of cereal crops that became possible once the population was permanently settled in an area where these plants naturally occurred.

Rainforest resources in the diet of Late Pleistocene Humans from Sri Lanka.

Early modern Humans expanded from Africa around the globe in the Late Pleistocene, from about 125 000 years ago onwards. In doing so they adapted to a wide variety of environments, though some habitats are thought... 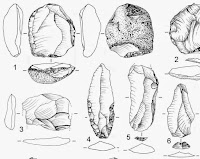 Acheulian and Levallois technologies from a single Late Pleistocene site Armenia.
Stone tools associated with the Acheulian technology first appeared around 1.75 million years ago and spread across much of Eurasia from about 900 000 years ago onwards. The technology is typified by tools in which pieces are chipped away from a central core to leave...

Stone tools from the Middle to Late Pleistocene of the Nefud Desert.
The Nefud Desert lies in the northwest of Saudi Arabia, and is thought to have been one of the key obstacles that early Humans, and other Hominids, had to pass as they expanded out of Africa into Southwest Asia...