Turtles have a fairly good fossil record, as would be expected for animals with bony shells inhabiting aquatic and marine habitats, but the origins of the group remain poorly understood. Molecular studies have suggested that they are members of the Diapsid Clade, which also includes Snakes, Lizards, Dinosaurs (including Birds) and Crocodiles, and probably closely related to the Archosaurs (Dinosaurs and Crocodiles), but anatomically they are very different to any other Tetrapod group, and the absence of any skull openings has led to the suggestion that they branched out from the other Amniotes (Vertebrates capable of laying eggs on dry land) very early in the history of the group, possibly even before the Synapsids (the group that includes the modern Mammals).

To date only two stem-group Turtles (animals on the way to becoming Turtles, and more closely related to Turtles than to any other group) have been described. The 260 million-year-old Eunotosaurus from South Africa is a Lizard-like animal, which has broad trunk ribs with a 'T'-shaped cross section, which form a protective case around the internal organs. The 220 million-year-old Odontochelys from China is much more Turtle-like, with a developed plastron (lower shell portion) and a beaked mouth, though it still retains side teeth and its dorsal surface is protected by flattened ribs rather than a carapace. The oldest known true Turtles with fused plastrons and carapaces are 216 million-year-old and come from Thailand and Germany,

In a paper published in the journal Nature on 20 July 2015, Rainer Schoch of the Staatliches Museum für Naturkunde Stuttgart and Hans-Dieter Sues of the Department of Paleobiology at the Nationa lMuseum of Natural History describe a new stem-group Turtle from the Middle Triassic Erfort Formation at Schumann Quarry in Baden-Würtremburg, Germany. 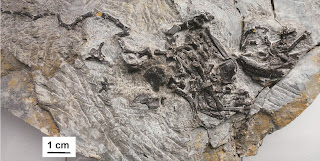 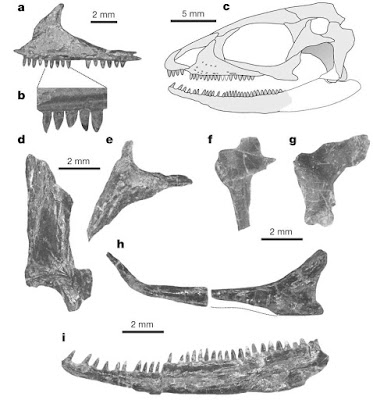 Skeletal elements from which the skull of Pappochelys rosinae was reconstructed. Schoch & Sues (2015).

Pappochelys rosinae was a small, flattened, elongate animal about 20 cm in length. It lacks a true plastron (ventral shell) but has a number of large, paired bony gastrula (bony plates produced within the dermal layer) covering its ventral surface, structures which had been predicted for ancestral Turtle-like animals, but not previously seen. As in Eunotosaurus and Odontochelys the dorsal surface is protected by thick, flattened ribs with a 'T'-shaped cross section. Pappochelys lacks a beak, retaining teeth in the front and sides of its mouth and (importantly) retains two pairs of skull openings, features which clearly identify it as a Diapsid, strongly supporting the genetic evidence for a Diapsid origin for Turtles. 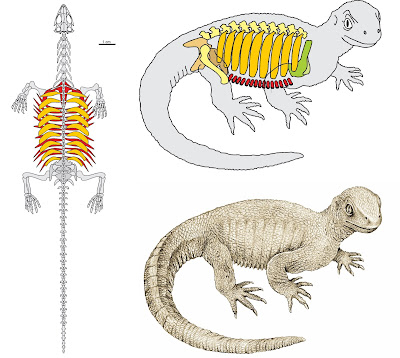 Reconstruction of Pappochelys rosinae, showing the position of the skeletal elements that would become the shell in later Turtles. Rainer Schoch/Staatliches Museum für Naturkunde Stuttgart. 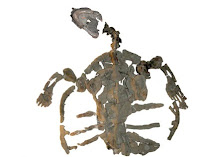 Desmatochelys padillai: A Protostegid Turtle from the Early Cretaceous of Colombia.        The Protostegid Turtles were a group of Turtles known from the Cretaceous that are thought to have been members of the Chelonioidea, the group that includes the two living Marine Turtle groups, the Chelonidoidea (Sea Turtles) and Dermochelyidae (Leatherback...

A new species of Turtle from the Late Cretaceous of Morocco.                                   Turtles are aquatic reptiles with a shell that encases their body, and into which the head and limbs can be retracted at least partially. They have a fossil record that dates back to the Late Triassic, about 220 million...