The Protostegid Turtles were a group of Turtles known from the Cretaceous that are thought to have been members of the Chelonioidea, the group that includes the two living Marine Turtle groups, the Chelonidoidea (Sea Turtles) and Dermochelyidae (Leatherback Turtles), and like these living groups are considered to have been true ocean-dwelling Turtles. A number of putitative 'Marine Turtles' are also known from Jurassic deposits in Europe and South America, but these are mostly incomplete, and none can be confidently shown to have been a true sea-dweller. None off these Jurassic Turtles is thought to be closely related to the living Marine Turtles, so if they were genuinely seagoing then they represent a separate evolutionary lineage that does not appear to have survived into the Cretaceous. As such the Protostegids are generally considered the oldest true Marine Turtles.

In a paper published in the journal PaleoBios on 7 September 2015, Edwin Cadena of the Centro de Investigaciones Paleontológicas and the Department of Paleoherpetology at the Senckenberg Naturmuseum and James Parham of the John D. Cooper Archaeological and PaleontologicalCenter at California State University describe a new species of Protostegid Turtle from the Early Cretaceous Paja Formation of Boyacá Department, Colombia. The Paja Formation is well known for its fossil vertebrates, which are preserved in ferruginous-calcareous nodules and concretions, often with layer of ferruginous oxides covering and infilling cavities in the bones. The formation has previously produced Marine Reptiles, a variety of Fish and a Dinosaur.

The new species is placed in the genus Desmatochelys, and given the specific name padillai, in honour of the late Carlos Bernardo Padilla, who led a number of palaeontological expeditions in the area, and helped to find some of the specimens from which the species is described, The species is described from eight specimens, the most complete of which comprises a complete skull and jaw plus part of the post-cranial skull, including the most of the forelimbs and carapace (shell). The other specimens comprise two complete skulls, one adult and one juvenile, three incomplete skulls one adult and two juveniles and two partial carapaces. One of these partial specimens has been listed as Desmatochelys sp. In previous works, but not enough material was know at the time to formerly describe it as a new species 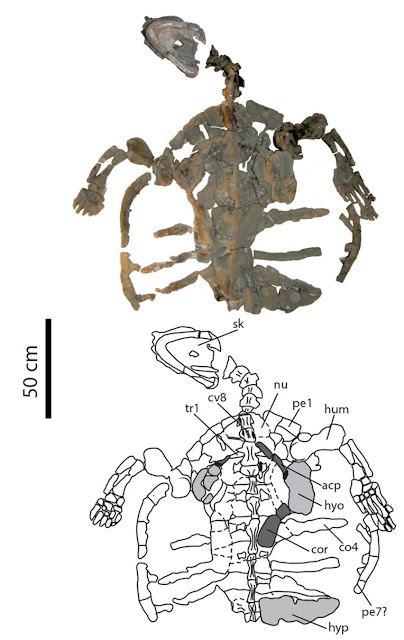 Desmatochelys padillai preserved in ventral view, holotype. For the bottom figure; light grey areas represent portions of the plastron and portions of the pectoral girdle are shown in dark grey. Cadena & Parham (2015).

Some previous examinations of the phylogenetic position of the Protostegids have suggested that they may not actually be members of the Chelonioidea, and may be paraphyletic (i.e. not a true grouping with a single common ancestry). A phylogenetic examination of the Chelonioidea including Desmatochelys padillai using the PAUP phylogenetic software package (computerised phylogenetic systems are widely used in taxonomy, as they are capable of assessing larger numbers of species and character traits, and cannot harbour biases – pet theories which are sometimes hard for human assessors to reject) recovered the Protostegids as true members of the Chelonioidea, with Desmatochelys padillai, at 120 million years old, being the oldest member of both groups. 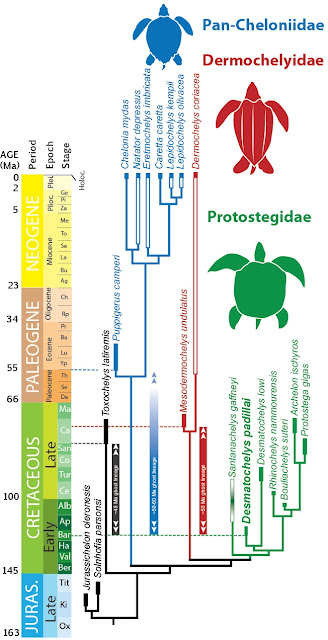 Chronostratigraphic distribution of Pan-Chelonidoidea clade. Solid square-rectangles at the tip branches are based on the fossil occurrences. White rectangles represent fossils that show the age of the stem lineages. Note that some taxon ranges are long due to stratigraphic uncertainty and should not be interpreted as illustrating a continuous fossil record. Taxon ranges for fossil occurrences were taken from literature. Cadena & Parham (2015).

A new species of Turtle from the Late Cretaceous of Morocco.                              Turtles are aquatic reptiles with a shell that encases their body, and into which the head and limbs can be retracted at least partially. They have a fossil record that dates back to the Late Triassic, about 220 million... 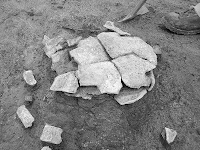 A Geomydid Turtle from the Miocene of Tanegashima Island, Japan.                       Geomydid Turtles are found in rivers, ponds and shallow marine environments across the tropical and sub-tropical regions of Asia, Europe and the Americas. They are variously known as Box Turtles, Pond Turtles or Wood Turtles. The classification of Geomydid...

A Jurassic Turtle bone-bed from the far northwest of China.                                      Turtles are aquatic reptiles with a shell that encases their body, and into which the head and limbs can be retracted at least partially. They have a fossil record that dates back to the Late Triassic, about 220 million...
Follow Sciency Thoughts on Facebook.