In mid-August 2014 seismic monitoring stations in Iceland began to record small Earth-tremors beneath the Bárðarbunga Volcano, which rises through the Vatnajökull Glacier in northern Iceland, Such seismic events are considered highly significant by volcanonolgists as they are often caused by magma moving into chambers beneath the volcano, and can therefore be an indicator of forthcoming eruptions. These tremors grew in size and frequency throughout the month, until on 31 August lava began to erupt from vents at the Holuhraun Lava Field (part of the Bárðarbunga-Veiðivötn Volcanic Complex) to the north of the Vatnajökull Glacier. This eruption continued through September 2015, producing a continuous eruption along a 1.5 km fissure with fountains of lava reaching 100 m in height. During the second half of the month the eruptive activity declined and became restricted to four craters along the fissure. Lava continued to be erupted from these craters at a declining rate until the end of February 2015. This eruption produced about 1.5 km3 of lava covering an area of about 85 km2. This is the third recorded eruption at the Holuhraun Lava Field (previous eruptions having occurred in 1797 and 1862–1864), and the first flood lava eruption in Iceland since the Laki eruption of 1783-84. 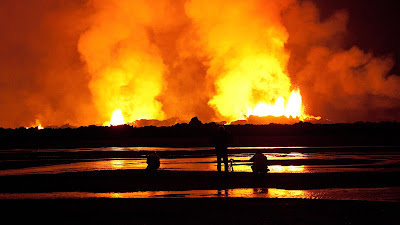 
In a paper published in the Journal of Geophysical Research: Atmospheres on 21 August 2015, a team of scientists led by Anja Schmidt of the School of Earth and Environment at the University of Leeds describe the results of a study of sulphur dioxide emissions during the 2014-15 Holuhraun Lava Field eruption, and discuss the implications of this for future policy making in Europe.


Remote sensing of the volcanic emissions, both from ground stations and from satellites, detected Sulphur Dioxide plumes rising as high as 3 km above the visible eruption, and suggest that an average of 35 kilotons being emitted per day throughout the eruptive episode, with emissions in September 2014 reaching as high as 120 kilotons per day. This implies that throughout the eruptive episode the Holuhruan Lava Field was emitting more sulphur dioxide than the total produced by all 28 members European Environmental Agency from all sources including shipping during the entire of 2010. It also significantly outperformed other volcanoes noted for their high long term sulphur dioxide emissions, such as Kilauea in Hawaii (which emits about 2-8 kilotons of sulphur dioxide per day on average) and Mount Etna in Italy (which emits an average of 3.5 kilotons of sulphur dioxide per day). This represents the largest output of sulphur dioxide by a single volcano since the 2000-2003 Miyake-jima eruption in Japan, which was in turn thought to have been the largest emitter of sulphur dioxide since the Laki eruption of 1783-84, which caused a significant period of climatic stress and cooling in Europe in the 1780s.


Schmidt et al. attempted to model the progress of emissions from Holuhraun towards Europe in September 2014 using the NAME computer modelling system, which has previously been used by the London Volcanic Ash AdvisoryCentre to model emissions from the 2008 Kasatochi eruption, the 2009 Sarychev eruption and the 2010 Eyjafjallajökull eruption. They used data from air quality measuring stations operated by the Irish Environmental Protection Agency, the Department for Environment, Foodand Rural Affairs, the Scottish Environment Protection Agency, the Finnish Meteorological Institute and the Netherlands NationalInstitute for Public Health and the Environment to determine sulphur dioxide in levels in Ireland, the UK, Finland and the Netherlands during this period.


This simulation suggested that sulphur dioxide from Holuhraun reached areas 3000 miles from the eruption itself, and heights of 4500 m in the atmosphere. The emissions were driven eastwards by a series of anticyclones (expand); in early September an anticyclone moving eastwards from the UK to Scandinavia initially produced northerly winds (i.e. winds from the north) which propelled sulphur dioxide towards Ireland, then westerly winds that drove emissions from Iceland towards northern Finland, later in the month two anticyclones over the North Atlantic and the UK coalesced, forming a ridge of high pressure over the UK which drove emissions through the UK and into the Netherlands.


Schmidt et al. compared these simulation results to data obtained by the OzoneMonitoring Instrument on the Aurora satellite and the InfraredAtmospheric Sounding Interferometer instruments on the MetOp-A and MetOp-B satellites, finding a close comparison between the calculated position of Sulphur Dioxide emissions and the observed positions, with discrepancies occurring on only two days (5 and 21 September). 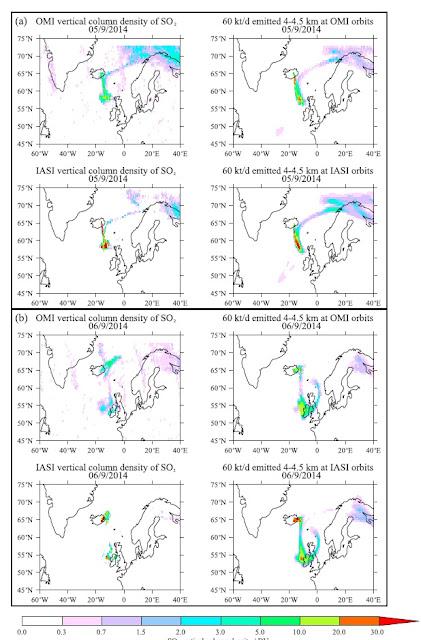 Comparison of satellite-retrieved and satellite-simulated SO2 vertical column densities (VCDs) for 5–6 and 20–21 September 2014. For the comparison of the model simulations to the Ozone Monitoring Instrument (OMI) the model output was sampled at OMI overpasses and the column operator was applied, and for the comparison to the Infrared Atmospheric Sounding Interferometer (IASI) the model was sampled at IASI overpasses between 08:00 UTC and 15:00 UTC. Both the OMI and IASI data have been gridded onto the same regular 0.5° by 0.5° longitude-latitude grid as the model simulations. Schmidt et al (2015).


This gave Schmidt et al. the confidence to calculate levels of Sulphur Dioxide based upon the model and satellite observations, coming up with an average figure of 20-60 kilotons per day per day during 6-22 September 2014, rising to 60-120 kilotons per day for the rest of the month. This puts peak emissions slightly higher than twice the peak emissions recorded from the Miyake-jima eruption (54 kilotons per day during December 2000), and suggests that over the course of the eruption Holuhruan may have erupted a total of 11 teragrams of sulphur dioxide (convert to something more sensible), less than the 18 teragrams erupted over the three year period of the Miyake-jima eruption, but more than twice as much as emitted by Miyake-jima during the first six months of that eruption.


The highest concentration of Sulphur Dioxide recorded in Europe during the Holuhruan eruption occurred at Ennis in the Republic of Ireland on 4-8 September 2014, with concentrations reaching a high of ~524 μg/m3 between 5.00 and 6.00 pm on 6 September. This is the first time that sulphur dioxide levels in excess of 400 μg/m3 have been recorded in Europe since 1990, following the introduction of stringent Europe-wide restrictions on industrial emissions in the 1980s. The second highest levels recorded were in Scotland, where average levels of ~320 μg/m3 were recorded on 20-25 September. The highest recorded levels in Finland occurred at Sammaltunturi during the night of 7–8 September, when average sulphur dioxide levels of ~180 μg/m3 were recorded. England and the Netherlands both recorded their highest sulphur dioxide levels on 22 September 2014, with ~96 μg/m3 recorded in England and ~82 μg/m3 recorded in the Netherlands.


Sulphur dioxide pollution is known to cause a wide range of health problems, and the World Health Organisation recommends that exposure to levels higher than 500 μg/m3 be regarded as hazardous, while the Clean Air for Europe Directive mandates that if sulphur dioxide levels remain above 500 μg/m3 for more than three hours then a public health warning must be issued. During the 2014-15 Holuhruan eruption recorded sulphur dioxide levels exceeded 500 μg/m3 only once and for only one our at a single monitoring station (Ennis), but concentrations exceeding 350 μg/m3 were recorded for over 100 hours in total at the same station during the course of the eruption, the highest sustained sulphur dioxide concentration recorded in Europe since records began. By contrast on Iceland the Höfn monitoring station, which is only about 100 km from the Holuhruan Lava Field, the highest concentration recorded was 3000 μg/m3, but concentrations exceeding 350 μg/m3 were recorded for only 124 hours in total.


In the United Kingdom sulphur dioxide levels in excess of 266 μg/m3 are considered 'moderate pollution' by the Department for Environment, Food and Rural Affairs. This level was not exceeded at any UK monitoring station during the Holuhruan eruption, but Schmidt et al.'s computer model suggests that this level was exceeded off the northern coast of Scotland for about eleven consecutive hours.


Sulphur dioxide monitoring in Europe began in the 1980s in response to high levels of the gas being produced by industry. Since this time tighter environmental regulations have almost eliminated this source of pollution, and many governments are considering cutting back on monitoring. However the Holuhruan Lava Field eruption has shown that such stations can be useful in monitoring naturally occurring sulphur dioxide emissions, which present the same hazard to health, and the Scottish Environment Protection Agency is now planning to extend sulphur dioxide monitoring in Scotland as a result of this event. Schmidt et al. also recommend that European agencies look to expand satellite monitoring of such emissions, which would allow the better prediction of the movements of clouds of sulphur dioxide, allowing local authorities to plan for pollution events before they occur.