Estimating the role of temperature in a Sea Star Wasting Disease Epidemic.

Most diseases affect only a single species of animal or plant, which acts to keep their virulence in check; kill too many of the host species and the disease becomes unable to spread. This creates a strong evolutionary pressure for diseases to become less virulent, enabling some form of equilibrium to be reached with the host species. However some diseases are able to affect multiple host species, such as Chytridiomycosis, a fungal infection which can infect at least 350 different Amphibian host species, or white spot syndrome, a viral pathogen which affects at least 78 different species of Decapod Crustaceans. Such diseases are under little pressure to limit their virulence, and can wipe out whole populations or even species of hosts as long as a reservoir is maintained in anther species, and therefore potentially capable of modifying entire ecosystems. One such pathogen is Sea Star Wasting Disease, a virus which affects over 20 species of Starfish, rapidly causing the death of all individuals infected. Several previous outbreaks of this disease have been recorded, but in 2013-14 a major epidemic on the west coast of North America affected Starfish populations from Alaska to Mexico, and has persisted to date. The onset of this epidemic was associated with anomalously high temperatures across much of the northeast Pacific, temperatures which have remained high as the Pacific entered an El Niño climate phase. This has led to speculation that the spread and persistence of the epidemic has been linked to the higher temperatures.

In a paper published in the Proceedings of the Royal Society Series B: Biological Sciences on 12 February 2016, a team of scientists led by Morgan Eisenlord of the Department of Ecology and Evolutionary Biology at Cornell University and Maya Grone of the Department of Health Management at the Atlantic Veterinary College at the University of Prince Edward Island, discuss the results of a pair of linked studies of the effects of Sea Star Wasting Disease on the Ochre Sea Star, Pisaster ochraceus, at different temperatures; one study monitoring the progress of the disease in wild populations on the coast of Washington State, the other in captive populations held at a range of specific temperatures.

Sea Star Wasting Disease is caused by a form of Densovirus; which is to say a single-stranded DNA VIrus lacking an external sheath placed within the family Parvoviridae. Most Desoviruses affect Insects or Crustaceans, and few have been extensively studied. Sea Star Wasting Disease causes Starfish to develop lessons on their skins which spread deepen as the tissues dissolve, eventually causing limbs to detach a and the Starfish to die, often leaving only ossicles and detached limb elements. 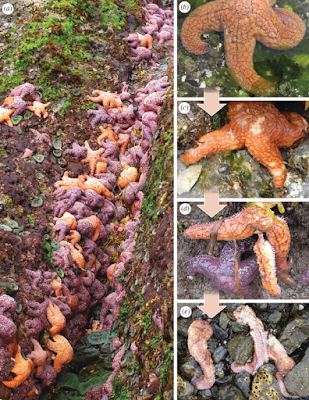 Representative photographs of Pisaster ochraceus pre-summer 2014 abundance and wasting disease progression. Pisaster ochraceus were abundant in the intertidal survey areas in May, 2014 (a). Healthy sea stars (b) develop lesions (c) that can lead to arms detaching from central disk (d) prior to extensive tissue necrosis and death (e). Eisenlord & Grone et al. (2016).

Eisenlord and Grone et al. monitored wild Ochre Starfish populations at sixteen sites on the Washington coast, in the San Juan Islands, the Puget Sound and on the Outer Coast, between 31 December 2013 and 17 July 2015. At all localities both sea and air temperatures were monitored, as well as Starfish mortalities. All sites exprienced outbreaks of the disease, which were typically short in duration but led to high levels of mortality. The worst outbreaks occurred in the San Juan Islands, where the disease had not been recorded before (and the Starfish presumably had not developed and resilience to it), with outbreaks causing the death of about 74% of the population in August 2014. The lowest mortality rates were associated with outbreaks in the South Puget Sound among populations that had previously encountered the disease, with about 14.9% of the population dying, though the level of mortality was highly variable within this area, only a single death was recorded at Hyde during the 18 month duration of the study, but 70% of the Starfish died at Ruston during an outbreak in August 2014.

All outbreaks preferentially killed larger Starfish, resulting in a reduction in the average size of Starfish within populations, as well as a higher proportion of juvenile animals. within the surviving populations (in some cases the adult population was completely wiped out). In most areas the total population of Starfish fell during the duration of the study, by an average of 67%, though on the Outer Coast the population actually rose by 37%. A significant link was found between sea temperature and outbreaks, with the probability of an outbreak rising steadily with warmer temperatures. Air temperature was found to have no direct affect on the outbreaks.

I addition to the study on wild Starfish,  Eisenlord and Grone et al. studied the progress of the disease in captive populations. Groups of Ochre Starfish comprising both juveniles and adults taken from populations known to have been exposed to the virus but not showing any symptoms were placed in flow through tanks at temperatures of 12, 14, 16 and 19℃ for 19 days each. All of the Starfish in the study died during this time, though the rate at which they began to manifest symptoms and eventually succumbed to the disease did vary, with the onset of the disease affected by both the temperature and size of the specimens, with Starfish first showing specimens more rapidly at higher temperatures and larger specimens showing symptoms more rapidly that smaller specimens. Among adult Starfish the disease progressed more rapidly as well, though all juveniles died within two days.

This fits well with the observation that the disease preferentially infected and killed larger specimens in the wild. Smaller adults and juveniles were not immune to the disease, but were less likely to contract ir, possible a reflection of their larger surface area.

Being able to remove or greatly shrink Ochre Starfish populations from habitats gives Sea Star Wasting Disease the potential to modify those environments. Ochre Seastars are principally predators of Mussels, colony-foriming Bivalve Mollusks which can cover intertidal flats, excluding other benthic organisms. While other Starfish on the west coast of North America also target Mussels, these are also affected by the disease. Removal of too many Starfish from these ecosystems creates the potential that Mussel beds may expand, covering other seafloor habitats and changing the nature of the whole environment. The disease has produced its worst recorded epidemic at the same time as the highest consistent temperatures have been recorded on the west coast of North America, leading to speculation that there may be a connection between its virulence and the temperature. Eisenlord and Grone et al.'s findings strongly support this link, leading them to raise concerns that any permanent rise in temperature associated with global warming could make the disease a permanent feature of these ecosystems, suppressing Starfish numbers and leading to the formation of extensive Mussel beds in areas where they are not currently found.

Sierra Leone reports a new case of Ebola. Between December 2013 and December 2015 an outbreak of the Viral disease Ebola, which causes an acute hemorrhagic fever, killed a total of 11 315 people in West Africa, with the vast majority of fatalities in Liberia (4809 deaths), Sierra Leone (3955 deaths)...