The genus Rafflesia contains 32 described species of parasitic plants from Indonesia, Malaysia, Thailand and the Philippines. The maximum diversity in the group is found in the Philippines, where 12 species have been previously described, including five from Luzon Island. All members of the genus are parasitic on vines of the genus Tetrastigma, with almost the entire body of the parasite reduced to a haustorium that grows within the tissue of the host. The only part of the parasite that extends outside the host is the flower (and later the fruiting bodies derived from this), thought these flowers are exceptionally large and distinctive. All Rafflesia flowers are massive, with the largest, Rafflesia arnoldii, reaching over 100 cm in diameter and weighing as  much as 10 kg, making it officially the world's largest flower. Rafflesia flowers are a mottled reddish brown in colour, and extrude a strong aroma of rotting meat, used to attract the flies which act as pollenators. This gives the plants their common name, 'Corpse Flowers', although this can be slightly confusing, as this temr is also applied to the Titam Arum, Amorphophallus titanum, a Sumatran Plant which also has a reputation for producing the world's largest flowers (which produces the world's largest unbranched inflorescence, though it is not as massive as the flower of Rafflesia arnoldii), and which also uses a rotting meat smell to attract Flies to act as pollenators. The Genus was formerly clasified along with a number of other parasitic plants in the Order Rafflesiales, but this has been shown by genetic studies to be an invalid taxon, made up of unrelated plants which superficially resemble one-another due to convergent evolution, with the genus Rafflesia now placed in the Euphorbiaceae.

The new species is named Rafflesia consueloae, in honour of Consuelo Lopez, the partner of industrialist Oscar M. Lopez, for her love of plants and inspiration for Mr Lopez’s pursuit of biodiversity conservation in the Philippines. This species is exceptionally small for a Rafflesia, with the largest flowers recorded reaching only 12.7 cm in diameter. The flowers arre reddish brown in colour and covered with powdery white warts; as they age the flowers darken. 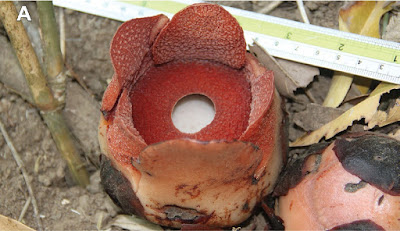 The flowers were found growing at two separate sites, growing on the roots of Tetrastigma vines in stands of Bamboo in  the remnants of lowland tropical evergreen rainforest, between altitudes of 300 m and 500 m on mounts Balukbok and Pantaburon. The sites were about 2 km apart within the Pantabangan-Carranglan Watershed. Due to this limited range Galindon et al. recomend that be considered to be Criticall Endangered under the terms of the International Union for the Conservation of Nature’s Red List of Threatened Species.They further note that the land occupied by the plants falls under the jurestriction of the National Irrigation Administration and the Pantabangan-Carranglan Watershed Protected Area Management Board, while the First Gen Hydro Power Corporation operates facilities in the area and provides support in biodiversity monitoring in the surrounding forests. They suggest that the plants could be at threat from forest fires in the dry season as well as local hunters operating in the area; the way in which the seeds of Rafflesia plants are distributed and find Tetrastigma vines is unknown and it is thought that a mammalian vector may be involved.

Gastrodia madagascariensis: A (not so) new species of parasitic Orchid from Madagascar. The German botanist Rudolf Schlechter published Orchidaceae Perrierianae, a description of all then known species of Orchids from Madagascar, including 332 new species based upon material supplied by... 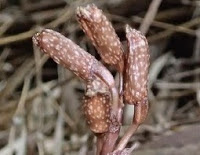 A new species of parasitic Orchid from Takeshima Island, Japan.
Orchids of the genus Gastrodia are found across temperate and tropical Asia, Oceania and Madagascar. They are mycoheterotrophs; parasitic plants which obtain nutrients and sugars from Mycorrhizal Fungi (Fungi which normally form symbiotic...
Follow Sciency Thoughts on Facebook.