Cryptomaster behemoth: A new species of Harvestman from the forests of southwest Oregon.

Harvestmen, Opiliones, of the suborder Laniatores are an extremely diverse group of small predatory Arachnids noted for a high level of endemism (i.e. most species have extremely limited ranges). There are currently around 4100 described species, but this is likely to be a severe underestimate, as the group are not well studied and populations of similar Harvestmen at even nearby locations often turn out to be different species. The genus Cryptomaster was erected in 1969 to describe a single large species of Harvestman from the forests of southwest Oregon, Cryptomaster leviathan, which was found dwelling under spruce bark in virgin forest to the south of the town of Gold Beach in Curry County.


The new species is named Cryptomaster behemoth, in reference to Behemoth, a large monster mentioned in the Book of Job (the single previously decscribed species in the genus was named Cryptomaster leviathan, in reference to another such moster from the Book of Job). This species was found at a number of locations, though all were within Lane County, to the east of Eugene in the Cascade Mountains, from Brice Creek in the south to the Mckenzie River in the north. This is to the northeast of the known distribution of Cryptomaster leviathan, with no known specimen of either species found at a site producing the other. This suggests a very limited range for both species (typical of Laniatorine Harvestmen), though both species seemed to be fairly abundant within their ranges. 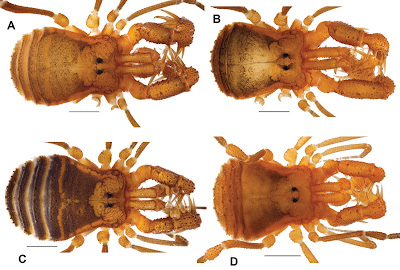